Blazers and loafers may be trending, but it's our off-hours outfits that are ready for their conference room debut.

The Great Resignation, The Death of the Girlboss, Quiet Quitting: If today’s workplace buzzwords are any indication, office culture has changed more in the last two years than in the past 20. But where does that leave the office dress code? After more than two years of sweats and slippers, the stuffy, dry-clean only styles we used to wear seem more like moth-eaten relics than relevant workwear. Plus, this year’s influx of new-to-the-office Gen Z-ers wearing their beloved Y2K Depop finds and baguette bags to work marks the end of an era dominated by basic leather totes. It’s clear the way we used to dress for work is dead, but the styles we most associate with professionalism (think: dad loafers and suit separates) are very much alive — they’re just not worn in the office anymore. It's our off-hours outfits that are ready for their conference room debuts.

Individuality and self-expression: These are the values the latest classes to enter the workforce favor above all else. And if what they buy is any indication, fitting in and moving up the corporate ladder aren't the top priority. In 2021, Lyst reported genderless, conscious, and Y2K fashion as a few of the year’s breakout style hits based on search queries from the app. Today’s 20-somethings want to stand out in a crowd wearing clothes that reflect who they are, whether that’s a pair of baggy pants or a more gender-affirming design, regardless of what it says about their employment status. “Today, [workwear] is more so subject to individual interpretation,” says Olivia Hancock, 22, Byrdie's associate beauty editor who contributes an interview series on Gen Z influencers [ed. note: Byrdie is also owned by InStyle parent company Dotdash Meredith]. She adds that “professionalism” has a bit more of a fluid definition to her generation.

The desire for flexibility and work-life balance are so synonymous with Gen Z that there’s an entire TikTok genre devoted to young professionals' demands and attitudes — namely, their unique ability to log off. See Cooper, Benny Drama’s brilliant Gen Z intern send-up with boundless confidence despite an absolutely iconic lack of talent and under-developed work ethic. There’s also DeAndre Brown, aka TikTok’s Corporate Baddie whose career aspirations are more "that’s not in my job description" than "a million girls would kill for this job." The trend of doing less and looking good while doing it represents a total 180 from the buttoned-up girl bossing of just a few short years ago.

And IRL Zoomers agree: The old "rules" of work are slowly fading away. “I don't want to have barriers to what I can or cannot wear. I'm aligned on the 'no sweatpants in the office,' but beyond that, I think it should be up to the dresser on how they want to be perceived,” says Rose, a Gen Z-er in marketing who lives in New York City and is “not a fan” of office dress codes.

There's no greater indicator of Gen Z's never-ending search for the unique than the mainstreaming of secondhand clothing, and there's no better symbol of this phenomenon than Depop. The resale platform, which has over 26 million users, 90% of whom are under the age of 26. And you can see why the site's so beloved by it's fans: It's much less likely you'll twin with a coworker if you show up wearing a vintage corset than, say, a new blouse from a fast fashion store that's in every mall and everyone's inbox. Optics aside, the climate implications of recycling clothing rather than buying brand new are attractive — according to recent studies, 45% of Gen Z shoppers stopped buying specific brands because of sustainability concerns.

The explosion of increasingly niche “aesthetics” like barbiecore, dark academia, balletcore, and riffs on the grandma trend also points to Gen Z's obsession with taste. Personal style is the goal, and not just the means to an end, for dressing well in 2022. For every mood, there is a hyper-specific, social media-approved rabbit hole of sartorial possibilities by which to define yourself. And for the so-called TikTok generation, that's part of the fun. The cherry on top is wearing that boundary-pushing look wherever your day takes you, whether that's party-girl tops to the coffee shop or keyhole cutouts to work.

The strong boundaries and individuality typical of Gen Z-ers are the antitheses of the eager-to-please, prone-to-burnout workplace attitudes millennials came up with. In the 2010s, Big Tech seemed like a utopia, work bled into life, anyone could become a boss if they strived hard enough — and fashion reflected those values. Just look at any of the recent TV takes on the era: Amanda Seyfried does her best grifter impression in a nondescript black turtleneck and blazer to channel Elizabeth Holmes. Julia Garner makes deals in VIP as Anna Delvey, wearing luxe but forgettable cashmere and leather. Even the skinny jean's quiet chokehold on the first half of the decade speaks to the era's uniformity: No matter how casual your office was, 10 years ago, everyone dressed mostly the same at work. Workplace fashion was not about personal style. Like workplace culture at large, it was about grinding.

In the more flexible 2020s, Zoomers feel comfortable bringing their whole selves to the office, whether or not their older bosses are used to it. “We’ll show up in whatever makes us happy — whether it’s jeans and a T-shirt or a statement maxi dress,” explains Hancock. “We don’t subscribe to the idea that we have to wear a suit and heels every day to be taken seriously.” You can already see this generational tension — between what’s expected and what’s personally appealing — playing out on social media, where debate rages and advice abounds.

“Realistic work outfit” videos are just as popular on TikTok as hyper-fashionable ‘fit checks on Instagram, but the lightning rod of office debate centers around the crop top. TikTok has echo chambers representing both sides of the argument. The “wear whatever you want” camp has a strong showing, favoring hyper-trendy outfits that showcase creativity, seeing no issue with the divisive, more revealing style.

Without a doubt, many of the unspoken (and unwritten) codes of professionalism are antiquated. Traditional office wear, which means, in large part, suits designed by and for men, telegraph conformity and tradition — and that’s by design. Suiting is about “uniformity,” a so-called level playing field to promote teamwork, according to fashion historian Doris Domoszlai-Lantner. That corporate uniform reached its zenith in the ‘80s, a time of cultural and sartorial conservatism: “Very sharp cuts, broad shoulders ... that was one of the dominant silhouettes of the '80s, and it was helped along by suits.” If “wear what you want” is the mantra of a new cohort of office workers, suiting and its history of disguising individuality has no place in their Monday-to-Friday style.

When structure is more self-imposed than culturally mandated (think: flexible work-from-home schedules that allow for dog walking and baking in between meetings), it’s not a surprise that office attire would follow suit, become more expressive, looser, and less (you guessed it) structured in both form and function. Plus, the workforce is more diverse than ever on all fronts: Gen Z-ers entering the office are more likely to self-identify as LGBT (and purchase clothing from both genders to wear to work), so fluidity in fashion is both a demographic necessity and a physical one.

Although more people are choosing their own adventures when it comes to personal style, the destinations still vary wildly across industries. One TikToker, who goes by the handle @prettycritical, has a whole series on “workwear that will get you fired,” where she skewers hyper-trendy “office edits” often found at online retailers. Her point is not that dress codes are awesome and should remain “a thing” forever, but rather that those PVC heels you’ve been eyeing on Revolve’s work selection might not be the best choice for your actual job.

Those who work in politics, healthcare, and law, for example, tend to agree. “I don’t like the ‘wear whatever you want’ thing because it’s an office, and while you can probably get away with jeans and a crisp white tee, you don’t want crappy jeans with a crop top,” says Heather, a self-described “elder millennial” who works in political communications in Washington, D.C. But she wholeheartedly admits that it’s more acceptable to mix and match than it once was. “Older people tend to be buttoned up in grays or a navy, and I’m out here in a floral jumpsuit, bright pink pants, or a Christopher John Rogers dress with rainbow stripes. I also have been known to wear gold Air Force Ones in the office,” she adds, noting that she will “usually wear or carry a blazer with me, of course.”

To the point of Heather's 9-to-5 Nikes, the fashion lines between work and life are blurring. Besides more streetwear in the office, there’s also more workwear outside the office. Chances are, you’ve noticed suit separates and their continued dominance among fashion insiders and trend-setting celebrities. And while Bella Hadid does love to cart around her laptop, the subversive plays on blazers and trousers beloved by Hadid and her ilk are a far cry from business casual. If anything, office fashion is more ubiquitous than ever, it’s just not worn to the office anymore. Even the humble loafer is having its moment in the sun — It Girls everywhere are embracing chunky soles and white scrunched socks, an indication the combo will remain a street-style centerpiece in the cooler months ahead.

Today’s new professionalism lives somewhere between the old guard and the next generation. Office dressing isn’t yet a free-for-all. It still holds weight — both in how we’re perceived and how we want to be perceived. “Clothes say a lot about your ambitions or lack thereof,” says Delphine Del Val, the Gen X founder of Pool Creatives. Her advice? Think about whom you work for and “how you can represent the brand/company best to succeed.”

And when in doubt, turn to experts who are masters at perfectly calibrating a look. “A blazer is your best friend,” says celebrity stylist Micaela Erlanger, whose work with Lupita Nyong'o includes a denim-on-denim Met Gala scene stealer. “You can literally layer a blazer over a T-shirt, blouse, or dress for an instantly polished look that doesn’t feel stuffy and is appropriate for just about any work setting.”

Plus, what used to represent conformity and company compliance now feels like a clever remix. Take the oversized blazer: It’s quite a twist of fate that a corporate staple would be the one piece to endure through the Lean In 2010s all the way to the current era where disparate “weird girls,” “clean” aesthetic devotees, and new preppies all dominate. But in 2022, when everything and nothing is trending all at once, the best way to challenge the old uniform is, well, to wear it, where and however you want. 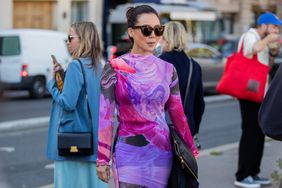 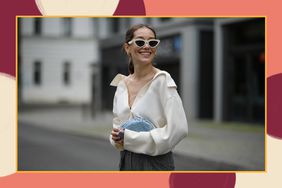