Netflix just dropped some good news on a Friday about Wednesday. The über-popular show (it's one of the platform's most successful shows, ever) has finally been renewed for a season 2. The series's creators and executive producers Alfred Gough and Miles Millar made the announcement on Jan. 6 via Tudum.

“It’s been incredible to create a show that has connected with people across the world," said Gough and Millar. "Thrilled to continue Wednesday’s tortuous journey into season two. We can’t wait to dive head first into another season and explore the kooky spooky world of Nevermore. Just need to make sure Wednesday hasn’t emptied the pool first.”

The show's social accounts also shared the news with an announcement video showing clips from season 1, as well as fan reactions to the hit with the magnetic leading lady Jenna Ortega narrating a voiceover. "Over the past few weeks, I've been hunted, haunted, and mimicked millions of times across the Internet," Ortega says in her signature deadpan Wednesday voice. "It's been pure torture. Thank you."

The post was aptly captioned, "More torture is coming. Lucky you."

The show, which premiered in Nov. 2022, quickly blew up on social media, particularly TikTok, where #WednesdayAddams amassed over 22 billion views, according to Netflix. This, in part, is thanks to Wednesday's now iconic dance that soon became a challenge set to Lady Gaga's song "Bloody Mary."

While no details have been shared about the upcoming season, Ortega spoke to Tudum about playing the gothic teen. “[Wednesday] sticks to her guns, and she’s not out to please anybody,” she said. “Which, as someone who used to be an immense people-pleaser, I really respect.” 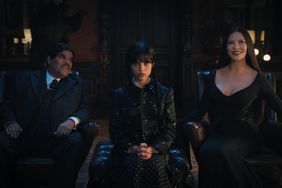