Mindy Kaling Addressed Concerns About Her Eating Habits on Instagram

Mindy Kaling is setting the record straight after fans expressed concern over her eating habits.

On Wednesday, the actress-slash-producer shared a carousel of food photos that included one of her surrounded by a table full of chicken wings, pasta, pizza, and more from Pijja Palace in Los Angeles — however, commenters called out the fact that there were no snaps of her actually partaking in the meal. "I don't see any actual eating here but ok...," said one critic, while another took a more well-meaning approach, writing: "There is no eating in these pictures. Just saying because it's kind of scary and I have been there."

Assuring fans that there was plenty of eating going on behind the scenes, Kaling replied to one commenter, "Oh babe I ATE." She also promised that skipping meals "is not my issue," adding: "But thank you for being kind!"

Back in April, Kaling, who has been candid about her weight loss in the past, revealed that the pandemic, as well as welcoming her son, changed the way she dieted. "After I had my daughter, I had to shoot a movie, like, two months later, so I was very much like, 'Just give me grilled salmon and sautéed spinach.' I'm going to eat that for three months," she told Entertainment Tonight. But after her second pregnancy, Mindy said she didn't have the same pressure to return to work and ate what she wanted.

"I had my son in the first year of the pandemic in September 2020," she explained. "It was this almost extended maternity leave. I wasn't going to be on camera, the studios were shut down." She continued, "When the world started coming back a little bit I thought, 'This kind of eating what appears, not taking any consideration for what I'm eating, is probably not the way to go."

As for her secret, Kaling says there isn't one. "Honestly, I didn't really do anything differently. I eat what I like to eat. If I do any kind of restrictive diet, it never really works for me. I just eat less of it... I wish there was something more juicy or dynamic about the way that I've lost a little bit of weight, but that's the way I've done it." 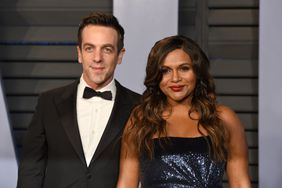 Mindy Kaling and B.J. Novak Are Starting the Sweetest Holiday Tradition This Year