And joked that she's like a brother to him.

Millie Bobby Brown and Henry Cavill have a unique friendship that formed while playing brother-and-sister detective duo Enola and Sherlock Holmes in Netflix's Enola Holmes franchise. And the 18-year-old actress recently opened up about her relationship with the 39-year-old actor — specifically, how it differs from friendships with her Stranger Things castmates.

"It's different because I grew up with Noah and Charlie. I met them when I was 10. So, for me, it does feel like your schoolmates," she told Deadline.  "And with Henry, it feels like a real adult relationship."

She added that their companionship does come with a set of boundaries. "[We have] like a really good friendship, a really healthy one. One that we have terms and conditions," she explained. "I know Henry. He has terms and conditions with me. I'm not allowed to ask about his personal life. It's like, 'Millie, shut up. No.' And I'm like 'Understood.' Whereas with the Stranger Things kids, it's different. There's no boundaries because it's like we're all siblings. But with Henry, he's very strict with me, which I appreciate."

The two also appeared on Good Morning America together where they spoke about their dynamic on set. "I'm from a family of five boys," Cavill said when asked what it was like having an on-screen sister. "So we're used to noise and making fun of each other all the time. And that's pretty much Millie. So there's no real difference." 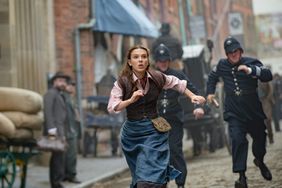