Back in May 2020, Megan Thee Stallion was allegedly shot in the foot by rapper Tory Lanez — and the incident is now the subject of a Drake song, or so it seems. People reports that Megan (real name Megan Jovon Ruth Pete) may or may not have been mentioned in Drake's new track with 21 Savage, "Circo Loco." In a series of tweets posted on Friday morning, Megan mentioned the song, which has lyrics that include the words "shots" and "stallion."

Megan initially disregarded the track and mentions asking for her opinion, writing, "I know I'm very popular but y'all gotta stop attaching weak ass conspiracy theories in bars to my name lol."

After fans pointed out that Drake "technically" name-dropped her with the word "stallion," Meg continued to brush it all off, saying that "stallion" can be interpreted as slang for a "tall thick woman." The tweets have since been removed, but People did publish screenshots.

Later, Megan continued to address the matter, requesting that other artists stop "using my shooting for clout."

"And when the mf facts come out remember y'all hoe ass favorite rappers that stood behind a N— that SHOT A FEMALE," she wrote. "People attack me y'all go up for it , i defend myself now I'm doing too much … every time it never ends and this did NOT happen until I came out and said I got shot … y'all don't [f— with me] okay cool f— it bye."

"Despite the irrefutable evidence that Megan was a victim of gun violence, the ignorant continue to support her attacker," Spiro said to People.

Lanez was charged in October 2020 with "one felony count of assault with a semiautomatic firearm, personal use of a firearm, and carrying a loaded, unregistered firearm in a vehicle." He pleaded not guilty to the charges. His trial is set to start on Nov. 28. 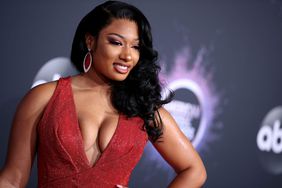