She shared the clip with her 2.8 million TikTok followers on Sunday.

Madonna’s never been afraid to do her own thing, so it’s only natural that her (apparent) coming out announcement would be anything but basic. What we didn’t see coming, however? That it would also be incredibly cryptic.

On Sunday, the singer shared a short video on TikTok teasing her sexuality to her 2.8 million followers. In the clip, a pink-haired Madonna (who also sported bleached eyebrows, a white cone-bra corset top, and sweatpants) shows a pair of pink underwear to the camera along with the caption, “If I miss, I’m Gay!” The pop star then tosses the undies towards a trash can only to very obviously miss by several inches, to which she looks back to the camera, gives a knowing glance, and turns away with a snap.

Madonna posted the captionless video without much context or further explanation, leaving many confused followers to speculate on what exactly the clip meant — but this isn’t the first time she’s dropped hints about her sexuality. In addition to serving as a vocal LGBTQ ally for years, the singer once told The Advocate in 1991 that “everybody has a bisexual nature,” adding, “That’s my theory. I could be wrong.”

The pop star also famously locked lips with both Christina Aguilera and Britney Spears during their 2003 performance at MTV’s VMAs, which she later recreated with Spears during the singer’s wedding to Sam Ashgari in June 2022.

Madonna's Iconic Looks: A-List
It's Been 10 Years Since Rebecca Black Released "Friday," and the Internet's No Kinder to Young Girls 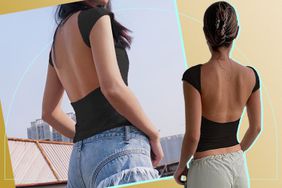