I'm crying 'cuz I love her.

Lizzo is entering her goth era — well, at least for her latest magazine cover. The pop star is Vanity Fair's November cover star, and she went full punk glam with a choppy mullet cut, lace-up dress, and black lipstick.

In the cover image, the singer models the new 'do, along with a voluminous red tulle coat by Act No1, which she paired with matching monster platform boots, fishnet stockings, and sheer gloves in similar crimson hues. She accessorized with a silver-and-back beaded choker and a smattering of coordinating rings. Her hair was styled into spikes on top and was worn long and pin-straight in the back. Her gothic glam (a black smoky eye and dark lipstick) matched the moody aesthetic flawlessly.

In another picture, Lizzo wore a black gown with leg slits and a plunging neckline fastened together with silk ribbon. Her mullet was styled in beachy curls, and she accessorized with silver grungy jewelry and latex gloves. Other looks included a metallic silver coat, an octopus-inspired dress, a sheer beaded cape and leotard, and a spiky headpiece.

In the article, Lizzo got candid about her experience as a Black woman in the U.S. “The way Black women have been treated in this country has made me feel very hopeless," she told the publication. "I don’t think there was a time when [we] were treated fairly and with respect. If I see hope in this country, it will come from the accountability of the people who have the privilege. As a fat Black woman, this country has never gone forward; it’s stayed pretty much the same for me.”

Lizzo also made a statement for women's reproductive rights over the weekend during one of her shows by projecting "my body my choice" onto her midsection. "My body my mother-fucking choice," she hollered into her microphone before the crowd erupted into cheers. She shared a video of the moment to her Instagram with a simple period as her caption. 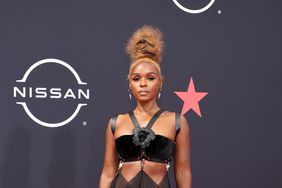