Emily Cooper may be known for sporting campy, over-the-top looks while galavanting around Parisian cityscapes in Emily in Paris, but for the third season’s premiere, Lily Collins opted to slip into a sexier (and much more low-key) version of French-girl dressing — forehead fringe and all.

On Tuesday, the actress arrived at the show’s red carpet premiere (in Paris, of course) wearing an understated tan Saint Laurent gown. What the floor-sweeping frock may have lacked in color, it certainly made up for in details, featuring shoulder pads, dramatic ruching, and a large, ab-baring cutout complete with a waist-flossing strap. Simple Cartier jewelry pieces and black platform heels completed Collins’s look, and she stayed true to French-girl style by donning a neutral makeup look and complementing her bangs with soft waves.

Before heading into the premiere, Lily revealed that this season’s finale will leave viewers guessing more than any of its predecessors when talking to Entertainment Tonight. “I will say that the last episode leaves you on another cliffhanger,” the actress shared. “The last episode feels like five in one.”

But if you were looking for any hints as to what’s in store for Emily after this installment hits Netflix on Dec. 21 (the show has unsurprisingly already been picked up for a fourth season), Collins is not your girl. As the executive producer and actress admitted, even she doesn’t know what’s coming next. “So many questions! And I don't have answers, nor do I even know the questions because I don't even know if [creator] Darren [Star] does," Collins said. "I'm like, 'What is my fate?!'” 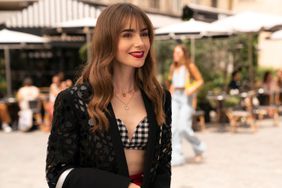