Remember when crafting was fun and not a performative side hustle? That's back.

"Do the thing that makes you happy, even if it's dumb," writer and comedian Sam Reece sings into the camera, before presenting, with a flourish, a giant fake hot dog made out of tin foil and red rhinestones, embellished — of course — with a dash of mustard made out of a yellow pipe cleaner. The piece exudes the kind of whimsy and unbridled joy that you wouldn't necessarily expect from a thirty-something adult, but rather an indoor kid stuck at sleep-away camp.

This is the very essence of Shitty Craft Club, a TikTok account started by Reece in November 2020 that today boasts over 61,000 followers. Reece regularly posts videos to the account of her hot-glue-gunning beads, googly eyes, pom poms — basically all the craft materials you remember from your childhood — to various household items, be it a mirror, a tissue box, or even a trash can. Using the jump cuts that have become signature to TikTok, Reece walks through how to bedazzle, be-bead, and be-pom literally anything for a little extra flair, injecting the videos with her own sense of style, humor, and love of puns. Among Reece's creations are the "corndle" and the "brheadband." (Aesthetically speaking, Reece likens Shitty Craft Club to if Limited Too were a 31-year-old queer woman, and Lisa Frank her lesbian girlfriend.)

The first iteration of Shitty Craft Club was an IRL one, borne out of Reece's desire for a creative outlet that wasn't tied to her livelihood.

"I came across an Instagram account called @imakestagram — she's an artist from Australia and she made some crazy-ass sunglasses and then I was like, 'I would like to make those sunglasses,' so I ordered the craft stuff and made them by myself," Reece recalled. "But then I felt like, 'Oh, I have so many creative friends who I think are feeling the same way, who would like a place to be creative and just have fun.'"

Shitty Craft Club found its first home at New Women's Space in Brooklyn, where Reece held monthly events until the pandemic hit. In quarantine, Reece took Shitty Craft Club to Zoom, but it didn't feel like the right venue — and neither did Instagram, for that matter, which was "more static." Cut to November, when Reece was, as she put it, "bullied" by a friend to create the Shitty Craft Club TikTok. Within a week, the account had 10,000 followers. (Now that it's once again safe to gather in person, Reece has begun to bring IRL Shitty Craft Club back, this time at Dusty Rose Vintage.)

Although Reece appreciates straightforward, non-shitty crafting, she felt like Shitty Craft Club exists to scratch a different sort of itch.

"[The DIY crafting] genre is very like, 'watch this person make this amazing thing and try to teach it to you in 700 steps that are really complicated [and] take practice' … which is great," Reece explained. "But I think there was just a lot of space for like,' I'm gonna make this thing that's really just tin foil and a ball with shit glued to it." Watching someone laugh at their own shitty creation, she continues, "is very freeing."

The distinction between "perfection" versus "trying your best" perhaps speaks to why Shitty Craft Club flourished on TikTok instead of Instagram, the social media platform most known for being heavily filtered and curated — as opposed to TikTok's more forgiving algorithm, which has spawned an 'anything goes' attitude on the platform.

On TikTok, Fashion Is Already Gender-Free

And that attitude aligns well with the goal of Shitty Craft Club — which is to simply enjoy the thing you're doing in the moment. In this, the golden age of side hustles, an era when grind is synonymous with success, care-free hobbies have all but become a thing of the past — leading to unnecessary added stress, particularly for women, who are already prone to holding themselves to impossible standards. It can feel challenging to even get started with a craft in the first place, knowing that you might never ascertain the DIY glory of your favorite YouTuber — and that fear of failure can hold some back. Reece said she herself has struggled with perfectionism in the past.

"If you're spending your whole day feeling extra pressure to go the extra mile at your job, that pressure can extend to hobbies and so much so that you might not even be able to have one because the pressure to find the hobby itself sucks."

"I used to be the type of person who — even writing in my journal, if I messed up I would rip out the pages and start over … and what is that? Who is that for?" Reece explained, going on to say, "If you're spending your whole day feeling extra pressure to go the extra mile at your job, that pressure can extend to hobbies and so much so that you might not even be able to have one because the pressure to find the hobby itself sucks. So just buying a jug of beads and being like 'I'm gonna glue them to a mirror' I think can be a very freeing exercise," Reece said.

For her part, Reece refuses to monetize the community she's created, resisting the very millennial urge to always be hustling. She only charges for the costs associated with hosting the in-person Shitty Craft Club events.

"I have no interest in being a shipping center, you know what I mean? That is a lot of work. I'm a comedian. I don't need to be going to the post office," Reece joked.

Instead, she's opted for bartering with other artists (for example swapping a giant strawberry she made for a dress by an indie clothing designer) or hanging her creations in her home. And Reece encourages others to do the same. A quick look through the "CLUUUB!" highlight on the Shitty Craft Club Instagram reveals that many have taken Reece's recommendation to heart, flaunting their creations with captions like, "I just spent two hours hot gluing googly eyes to this glass jar." One poster rhinestoned their refrigerator; another completely transformed their ceiling's light fixture with pom poms.

The joy in partaking in Shitty Crafts is evident both in these images, as well as the messages Reece has received, with crafters divulging that the account helped them find fun and creativity again during a tough year. Some have even begun their own craft nights with friends, further expanding a community Reece says is mostly female and queer.

Reece recommends that those interested in getting started in Shitty Crafts check out their local 99 cent stores — or if your city has one, paying a visit to a Creative Reuse Center. But most importantly perhaps is taking the spirit of Shitty Craft Club and applying it to the rest of your life, as Reece said she's done, initially in taking new workout classes and later in regards to her comedy career.

"I just started walking into new experiences, like if I'm bad at this, that's OK, because I'm gonna have fun [and] it'll be something new," Reece said.

As Shitty Craft Club transforms and expands, there is one thing that remains consistent, and that is that Reece has everyone repeat after her as she recites her own pledge: "Everything I make is perfect and I will love it no matter what and I also won't sue Sam if I burn myself on hot glue." Affirming, and, per Reece, completely legally binding. 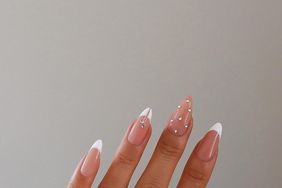 Bedazzled French Manicures Are Going to Be Everywhere This Summer