I have used sex toys in the bedroom with previous partners and really enjoyed it. My new boyfriend is way more conservative and I am not sure how to introduce the idea to him. I am worried about him being freaked out or turned off. He is great in bed and I don't want him to feel like he is not enough for me. —Buzz Lightyear

There is a lot to be said for couples bringing sex toys into the bedroom. In addition to toys all but guaranteeing great orgasms, studies show that couples who reported feeling sexually satisfied are more likely to have experimented with sex toys together.

Some of the most common fears that people have when introducing the idea of sex toys is that their partner will feel insufficient, insecure, or hurt by the request. Making sure the request is delivered in a sensitive, loving way is key. Even if he says yes, he may be nervous and not know how to proceed. He may not know the best way to use it on you, and thus feel ashamed or vulnerable. Providing an atmosphere in the relationship where he can feel secure, safe, supported, and free of judgement will go a long way in getting you the results you want. Here's what you need to know...

Ways to Introduce a Sex Toy in the Bedroom

Compliment the relationship. We tend to feel most comfortable exploring with someone we love and trust. Let him know that this is a sign of how close, vulnerable, and comfortable you feel with him.

Calm his fears. Let him know how great he is in bed, how much you love his junk, how sexy he is, how hot for him you are and, most of all, that no toy can be a substitute for the closeness and connection you feel with him. As great as they are vibrators don't give you coffee in bed, dry your tears, have dinner with your parents, and share their deepest thoughts with you.

1. Share an article or study on the benefits of sex toys.

2. Try, "Ever since I read an article about _____ (fill in the blank with the toy of your choice), I have been fantasizing about you using it on me." You could even mention this one full of fun sex toy ideas.

3. Another approach is to say, "One of my friends told me that she and her boyfriend used _____ (fill in the blank with the toy of your choice) and it was amazing. I have been curious ever since. Would you be open to trying it?"

4. Tell him, "I had a crazy dream that you used a sex toy on me the other night. It really turned me on and now I can't stop thinking about it. Can we try that?"

Give credit where credit is due. Anytime you are using a sex toy with a lover in bed, you want to give the sex-toy user, your boyfriend, the credit for the pleasure you receive, not the toy. Give him kudos for the great skill he exerts when he uses said toy. It'll go a long way for his confidence in bed, and his openness to trying more new things you like.

How to Spice Up the Missionary Position

The Best Sex Toys for Beginners

Shopping for sex toys no longer means walking into some creepy darkly lit sex toy shop. You can walk into a clean well-lit store with experts, like the Hustler store. Or female-owned stores like the Pleasure Chest or Babeland. If you don't think he'd be comfortable facing a sex shop, you may want the discretion of online shopping at home. Try doing it together so it is inclusive and he can help choose toys that seem exciting to him. Here are my suggestions for the best types of sex toys to try for the first time.

How to Stimulate the Clitoris, According to Experts

Toys he doesn't touch. With the new teledonic devices, vibrators and toys that can be controlled by a remote or an app on your phone, he can master your orgasm without even touching you (or the toy, for that matter). You can play in the bedroom or go out with a goodie like We Vibe Sync ($149) between your legs while he controls your pleasure from an app on his phone. If he likes the toy idea in theory but is acting a bit squeamish in practice, this might be a fun way to ease him in.

The experience of using sex toys in bed together can enhance intimacy, increase the orgasms and take your sex life to the next level as a couple. Why wouldn't he want to come and play? 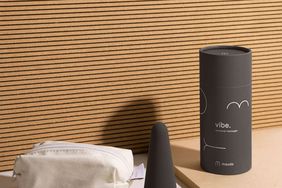 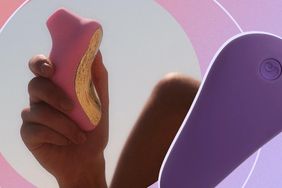 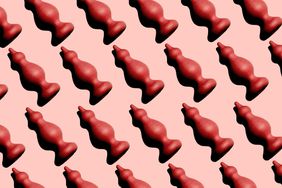