The Only New-Mom Hack Is Money

Sleep is for the rich.

Gwyneth Paltrow — whose company, Goop, sells $885 sterling-silver Ben Wa balls for strengthening your pelvic floor — believes that wellness is free. And "sleeping well" is part of her definition. Her youngest child is 12; perhaps she's forgotten how much sleep actually costs when there's a little one around.

Brand-new babies have nut-sized stomachs and no circadian rhythm. New parents go to bed each night not knowing whether they'll be awoken in an hour or three, nor how long they'll be up when they are. Sleep-deprived, they throw money at the problem because they lack the energy or clarity to do much else — and also they are promised that purchasable items will solve it. When I was pregnant and trying to register for gifts, a mom friend told me that having the wherewithal to even comparison-shop was a luxury I would soon lose.

Before my daughter's birth, we outfitted her nursery with Crate and Barrel blackout curtains ($171, but only because I found two of the four panels on eBay) and registered for multiple Halo SleepSacks ($23 apiece) and a Baby Merlin's Magic Sleepsuit ($40) that's like a straightjacket for slumber. We borrowed a Rock 'n Play (which retails for $90) after discovering she wouldn't sleep in her $190 bassinet (also borrowed) or crib ($80, an Ikea bargain, plus a $110 soy-foam mattress). Eventually we bought a second truly magic sleepsuit and received a white-noise machine ($50) as a gift. That's about $800 and counting, spent or received.

My daughter started sleeping through the night when she was about 3 months old. I'm not sure what worked or even how much was nurture versus nature, but that's kind of beside the point, which is that we could afford trial-and-error. And all that stuff.

Lack of sleep "can make you feel like you’re on an emotional roller coaster."

The Snoo, a most lauded baby-sleep investment, costs $1,295 to buy, or $149 per month to rent. It was invented by celebrity baby expert Harvey Karp, M.D., after his bestselling 2003 book, The Happiest Baby on the Block, elevated him to something of a snooze guru. He promised readers a miracle: That they could get their babies right to sleep with swaddling, shushing, side or stomach position, swinging, and sucking — and for many families, the 5S strategy works. His robotic bassinet takes care of three of the five.

Karp has helped moms including Madonna and Michelle Pfeiffer and received funding for the Snoo from investors Justin Timberlake and Jessica Biel, Zoe Saldana, and Paltrow. Ashton Kutcher said on a podcast that he's "eternally grateful" for the "unbelievable" bassinet, and Kate Hudson posted an Instagram story about setting one up in her nursery.

Karp hopes insurance plans will one day cover the cost, as many now do for breast pumps. And a couple of companies including Qualcomm and Dow Jones rent Snoos for their new-parent employees. But new moms without the means for it and other pricey interventions must suffer — and suffer they do.

Recent research has found that women start at close to seven hours of sleep a night on average before baby, and they lose one to one and a half hours per night in the first three months. That brings them down to dangerously little sleep in terms of what's needed to function. According to one study, getting six or fewer hours per night was found to have the same cognitive impact as being sleep-deprived for up to 48 hours. Sheila Chhutani, M.D., an ob/gyn in Dallas explains that a lack of sleep upsets the balance of neurotransmitters in your brain, "which can make you feel like you're on an emotional roller coaster."

It sucks to get less sleep, and it sucks even more when the sleep you get is in unsatisfying fits and starts. "What really affects almost every aspect of your life is not how many hours of sleep you get, it's how pieced together those hours are," says Alice Callahan, Ph.D., the author of The Science of Mom: A Research-Based Guide to Your Baby's First Year. According to West Virginia University researchers, the typical new mom with an infant up to 6 months old wakes up roughly three times per night (and stays up for about half an hour each time).

Each time you awaken, you have to start your sleep cycle over again. This is called sleep fragmentation, and experts say that just a few nights of this can make you as cognitively impaired during the daytime as not sleeping at all does. In fact, a study in Sleep Medicine showed that people who were awakened four times in an eight-hour period were as depressed, fatigued, and confused as those who slept for only four hours. A 2016 study showed that women with poor sleep quality were more than three times as likely to be depressed than new moms who slept soundly were.

And there is truly no DIY mom hack that can piece together the destruction that ripples out from there.

"Women with poor sleep are at a higher risk for developing postpartum depression, and women who have postpartum depression are at higher risk for experiencing poor sleep, which can then worsen their depressive symptoms," says Reem Abu-Libdeh, M.D. She works in the maternal health clinic at UCSD, where she's studying the Snoo's effect on perinatal mood and anxiety disorders. "Dr. Karp's research has shown that the Snoo helps babies get approximately one extra hour of sleep a night, which can make a huge difference for women in the postpartum period and their mood or anxiety states," says Abu-Libdeh. If you use the Snoo for three months, it'll cost you about $14 for each of those hard-won hours every day. This is close to how much the average American spends to feed their family per day.

There are some things you can do rather than purchase to get more sleep, but many of them still presume a certain level of privilege — which may explain why University of Rochester researchers found that more than half of low-income mothers suffer from postpartum depression. You can't nap during the day if you're back at work. You can't have a semi-unproductive workday or roll in late, if you're in the service industry, work in a warehouse, or are otherwise on the clock — fields which rarely offer the kind of parental leave for those couple months with horrible sleep. You can't stick your infant in their own room — which is shown to improve their sleep after four months — if you don't have an extra room to give. You can't sleep through a 3 a.m. feeding unless you have a partner or other family member around to handle it. And that one truly cashless option still nets out to someone missing out on sleep.

This is probably why Karp once said in an interview with Vox that there are two kinds of parents who buy his $1,300 bassinet: "people who can afford it, and people who can't." And then there are people who can afford a whole other level of intervention: household staff. You can skip the Snoo entirely if you can hire a night nurse to bottle-feed your baby and shush and swaddle her, or even take care of her before and after breastfeeding, while you snag more sleep.

When Chrissy Teigen was pregnant with daughter Luna, she said the recommendation of a night nurse was the best parenting advice she and John Legend had received. "It's pretty unanimous," she told US magazine. "Everyone was like, 'If you can do it, do it!'" According to parenting blog MommyPoppins, these overnight domestic workers charge from $200 to $300 per night, and tend to stick around for the first seven or eight weeks. That's $10,000 to $17,000 in the first two months.

Some infants take up to a year to sleep through the night, according to Chhutani, which is when some parents of means pull in the big guns: a sleep coach. This is a consultant who analyzes your child's sleep difficulties and helps you establish behavioral changes that will bring back the Zs. Ali Fedotowsky-Manno hired one who charges between $3,375 and $5,900 for services including a 90-minute consultation, two or three days of in-home coaching, and a month of follow-up support. She wrote a blog post on the subject saying she considers this an "investment in your health and overall well-being and an investment in your child's overall well-being."

The implication, then, is that if you don't have the money to "invest" in such a way, you should consider finding it. It would be nice if insurance companies covered the cost of interventions that actually work. And if generous parental leave policies were the norm, at least parents could try to sleep in or catch up on sleep during the day. You know, "sleep when the baby sleeps," which is when many parents are busy at work.

In the meantime, we need to face the fact that postpartum sleep is expensive — and therefore wellness for new parents is too. "When sleep isn't going well, things can spiral downhill so quickly," says Callahan.

A few days ago, my daughter, who had a bad cold, woke up in the middle of the night for the first time since she was an infant. Multiple times. The next day, I skipped the gym, didn't have much of an appetite, and barely got any work done.

The next night, my husband and I sat with her in the bathroom-turned-steam room for 10 minutes while the hot water ran (let's say $2?); did a thorough snot suck with her NoseFrida ($16); cranked up her a humidifier ($70); and, at the advice of her pediatrician ($20 copay, $666 monthly health insurance premium), propped up her mattress with blankets (handmade by my mother-in-law, priceless).

That time, all of us slept through the night. Maybe it was a fluke, maybe she was just less sick by then. But more likely, we got exactly what we paid for. 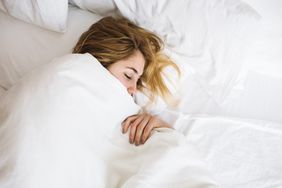