Ahead of Mother's Day, InStyle explores how women are navigating motherhood in 2018, from the role of the pregnancy selfie to new legislation empowering the working mom.

Jenny felt heat rise to her cheeks as she lunged toward her husband, pushing him while her pre-schooler watched, wide-eyed, in the corner of her kitchen. She heard her voice, breaking, angry, as she tried to get her husband to understand how she was feeling.

Today, Jenny, whose daughters are now 7 and 10, knows that her outburst was the result of a constellation of symptoms that made up postpartum depression. But at the time, all Jenny could think was that something was wrong with her. “I had always had a pretty quick-trigger temper, but as soon as I had my second daughter, it manifested in rage. I would blow up about anything, like if my husband didn’t get bottles ready in the morning before daycare drop off. During my commute to work, I would fantasize about swerving into oncoming traffic. I felt like anything could set me off. I could have been in a cave and still find something to be pissed about,” remembers Jenny, who blogs about her experience with postpartum depression at TranquilaMama. “It was scary, and I felt so alone.”

In the seven years since Jenny pushed her husband, she's been an outspoken survivor of postpartum depression (PPD),posting about its reach (according to the American Psychological Association, about 1 in 7 women are affected by postpartum depression) and the need for access to treatment. But while Jenny has anecdotally seen more and more women become familiar with the concept of postpartum depression, she says that many women equate “depression” with crying jags or lethargy, and not feelings of white-hot anger. “Anger seems like an emotion that’s not feminine, that’s not motherly, and no one talks about it,” says Jenny.

But anger—raging at a partner, a Facebook thread, even an infant—is common among many new moms, catching them off guard. “There’s so much stigma around anger that people stay quiet about it or assume something is wrong with them,” says Tiffany A. Moore Simas, MD, Associate Professor of OB-GYN, Pediatrics, Psychiatry, and Quantitative Health Sciences at the University of Massachusetts Medical School. Simas says that fluctuating hormones, exhaustion, and a massive identity shift and relationship recalibration are all factors that contribute to feelings of anger in new moms, and while angry outbursts may be common, they’re often hidden under a code of silence. “Postpartum depression looks different between women, and if women are feeling like their emotions are out of control, then they should absolutely speak to their OB, or their child’s pediatrician, or a therapist to figure out a treatment plan,” says Simas.

“I was surprised by just how angry I felt when I had my daughter,” says Jane, mom to a 1-year-old. “Here was this tiny, helpless human who I loved so much. I’d gone through IVF, we’d spent thousands of dollars to have her, and I remember very clearly this scene of me yelling at her when she was five days old, because she couldn’t go to sleep.” Jane’s outbursts scared her, so much so that she had her husband take over bedtime duty. “I felt like I couldn’t do this. I mean, who yells at an infant? And I also felt really angry that no one had prepared me for this, especially once I ended up going to a therapist, who said that what I was feeling was really common. It’s like, why isn’t anyone warned?”

Maternal anger has been gingerly explored in literature for decades. Anne Roiphe’s 1970 book Up the Sandbox, in which new mom Margaret has violent fantasies including blowing up the Statue of Liberty, was one piece of literature which explored the messy emotional landscape of maternal emotions. More recently, Elisa Albert’s 2015 After Birth, in which the main character, Ari, feels rage in response to her unplanned C-section, casts a light on the anger so many women experience when birth plans go awry. But it’s not that easy to bring up in real life, where even new mom support groups tend to focus more on the practical (“which breast pump is best?”) than the psychological. And of course, Instagram shoots, where new moms comment about how #blessed they feel, can make moms feel more alone. Even posts that hint at the messier, darker side of motherhood are still cast in soft light, with emojis and a “you got this, mama!” ethos softening the edges of how new moms may really feel.

Another common trigger of postpartum anger is the birth process, which can be clinical, isolating, and terrifying. “I have a lot of clients who feel angry about how their birth went. Maybe they had medical interventions, maybe they had a C-section, maybe they felt their doctor didn’t listen to them, or maybe they were overwhelmed by the physical pain and process,” notes Melissa Divaris Thompson, LMFT, a therapist in New York City whose company, Embracing Joy, focuses on pre- and post-natal care. “Women may have a lot of complex emotions surrounding their birth, and they may feel guilty for feeling anything less than happiness for having a healthy child.”

Laura, a mom of a 1-year-old, found herself angry about her unplanned C-section—and especially angry at women who were able to have the natural, intervention-free birth she’d intended. “I would seriously snap at a pregnant women who explained they were planning to have a home birth. I just felt so angry and betrayed at my body, and that took a long time to get over. I also wasn’t able to effectively breastfeed, and that also made me furious. I felt a lot of guilt and shame at my body, like, if my body couldn’t do these things, was I really meant to be a mom?”

Of course, new moms aren’t the only women experiencing a surge of rage. Part of the problem is cultural. Several reporters named 2016 “the year of anger.” Our tumultuous 24/7 news cycle can trigger our emotions, and, of course, social media makes it easy to find someone to pick a fight with at any time of day. “We encounter more opinions in an evening than our ancestors did in years,” notes Jo Allison, an analyst at Canvas8, a consumer insights firm. “In addition, the constant stream of information means that the more extreme opinions and emotions can rise to the top.” In other words, when you innocently log into Facebook, you’re likely to be confronted by an angry opinion—and it’s hard not to be drawn into the fray.

“I get so angry on social media,” says Kelly, mom of a 1-year-old. “I get so personally invested in these mom boards. I know I should just quit them, but I can’t.” Kelly cites an example of getting into a virtual back-and-forth over whether or not Zika was a credible threat to toddlers, remembering that she was actually shouting at her computer screen. “It was so weird, because ultimately, I don’t care. I just wanted this other mom I was fighting with, who said that she wasn’t bringing her 3-year-old son to Mexico because of Zika threats, to admit she was wrong.”

Weirdly, these virtual mom communities, created to bring parents together, can actually enhance feelings of anger, experts say. Parenting shouldn’t feel like an individual pursuit, but in our crazy-busy culture, between relationships and work and raising kids, it’s hard to cultivate an IRL tribe of parents. And these virtual parent group substitutes often exacerbate feelings of isolation, judgment, and guilt.

VIDEO: For Bella and Yolanda Hadid, Mother-Daughter Bikinis are a Thing

“Anger is a secondary emotion,” says Nicole Washington, PsyD, a board-certified psychiatrist based in Tulsa, Okla. “It rises up to protect ourselves from other vulnerable feelings, like fear or sadness.” In Kelly’s case, she realized that her anger was masking the guilt she felt about planning a trip to a country with a Zika risk and her resulting fear that she wasn’t being a good parent.

While labeling and accepting anger is one thing, how can you get over it? For many moms, therapy is an invaluable resource, allowing them to sort through emotions, identify anger triggers, and develop strategies for coping. Another key element is self-care. Yes, it’s a buzzword, but for moms who’ve felt their anger bubbling over, it’s also vital. For Jenny, running is an outlet, as are writing, yoga, and working from home one day a week. For Jane, it’s weekly, non-negotiable babysitter nights, when she and her husband will either go out on a date or she will go out with friends. And for Laura, it’s working with a therapist to really speak about the fear, lack of control, and guilt she felt over her labor.

But equally important is rejecting the image of how motherhood “should” be. Motherhood can be messy as hell, and anger is a fundamental element of being human. By embracing a spectrum of emotions, working through anger can be a valuable way to become an even better parent. “Asking for help and acknowledging a problem can be one of the bravest, most selfless steps you can do as a parent,” says Jenny, who shares her story with many expecting parents and lets them know they can call her if they ever feel ready to explode. And, Jenny adds, for moms truly struggling, there’s a light at the end of the tunnel. “I always think: I got over PPD; I can get over anything.” 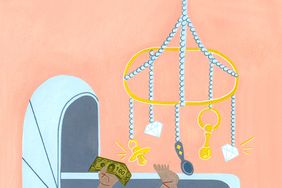 The Only New-Mom Hack Is Money