I Have Herpes—When Do I Need to Tell Sex Partners About It?

I'm always very safe about sex, but my last long-term partner had genital herpes and lied about it before we stopped using condoms. I am mortified! I dumped the douchebag boyfriend, but I'm not exactly rid of him—now the herpes is all my own. I'm getting back into the dating world again. At what point do I need to tell potential sex partners? —Mortified in Maine

Everybody has a herpes. I frequently get questions from people who have something uncomfortable they need to share with a new sexual partner and are nervous to tell them. It's not just STIs. I got a call from a woman who'd lost more than 100 pounds and was nervous about her new lover seeing her stretch marks for the first time. Another from a woman who'd had a mastectomy and was anxious about her new girlfriend seeing her chest. A male client was so obsessed with a burn scar on his abdomen he was almost phobic about taking off his clothes. Everyone's got baggage. What's more important is how we unpack it.

An STI is not a scarlet letter; it's an infection. There is a stigma, but, as a society, we really need to get over it—and that's going to have to start with you. If you can learn to accept yourself post-diagnosis, there's a better chance that your potential sex partners will too. According to the CDC, one of every six people aged 14 to 49 has herpes, 2.86 million cases of Chlamydia are reported annually, and HPV is so common that "nearly all sexually active men and women get the virus at some point in their lives." This is the reality of sex today.

Don't get me wrong: STI prevention and treatment need to be taken seriously. Certain STIs can raise cancer risks, cause pregnancy complications, and destroy fertility. But one thing they do not have to be? A cloak of shame. In my clinical experience, the more shame we feel, the less likely we are to take good self-care precautions, and that is harmful.

And yet the reality is that wou will be judged or rejected at one point or another because of your infection. How often likely will depend on what type of STI you're dealing with. So what if the diagnosis were something more series, like HIV? On Season 5 of my show Couples Therapy with Dr. Jenn, Dick Donato of Big Brother revealed, for the first time, that he was HIV positive. I will never for get the words he used, speaking about his love life: "This is probably the last relationship I'll ever have." He thought that he would never have sex or a relationship with a woman again because of his HIV. This turned out not to be the case. When I spoke to him recently, he reported that his dating life had returned to pre-diagnosis levels.

I Go Down on My Partner Often, But He Rarely Returns the Favor—How Do I Change That?

Medical developments in HIV treatment in recent years have been a game changer, nearly zero-ing a person's chances of transmitting the infection during sex. In a study of 350 gay couples where one person was HIV negative and the other was HIV positive and receiving anti-retroviral treatment, participants had unprotected sex almost 17,000 times (go, team!) over four years, and there was not a single case of transmission. While I don't recommend having unprotected sex regardless of HIV status, what this tells us is that a disease that was once a death sentence, with the proper treatment, does not have to prevent you from having a great sex life.

So back to your question about when to tell a potential sexual partner about your STI. This is not the kind of information you lead with on a first date. "Hi! I'm Mary. I have herpes. Can you please pass the bread?" You want to make sure your new partner is worthy of the information—you want to screen them over time to make sure they are sensitive, trustworthy, and will keep this information confidential. This screening process also happens to be a great litmus test to figure out whether a potential lover is just looking to hump and dump or if they are really interested in you as a person, long-term.

Where it gets more challenging is if you are just looking for a hook up. Regardless of sexual intention, you owe it to a potential partner to share this information before you get naked—before introducing any substances that impair decision making. So you need to brace yourself for disappointment: Your STI may be a deal breaker for them. Unfortunately, that's sometimes the cost of telling the truth, whether we're talking STIs, life plans, or plain old personalities.

But I do have some advice for making that awkward conversation as painless as possible:

1. Make sure you have privacy when you have the discussion.

2. Have the talk outside of the bedroom, not in the heat of passion or right before things take off.

3. Don't be overly dramatic or emotional when presenting the information. Often, partners learning new information take their emotional cues from your delivery. If your partner has never been with someone who's shared that they have an STI, they may think it is a much bigger deal than it is if you are, say, crying while telling them.

4. Share information about any precautions you take to minimize risk or information that may be reassuring.

5. Be prepared to educate them about the disease. Even though the odds are that your partner has slept with someone with an STI, not every one is as honest as you, and there may be questions.

6. Give the person some room to digest the information and come back to you with questions.

7. Don't neglect your own sexual health by not asking the other person about their sexual history, requesting information about the last time they were tested and what the results were. Just because you have herpes, doesn't mean that you can't get a new strain of the virus or a different STI.

8. If someone is reluctant to move forward, respect that decision and try not to take it as a personal value judgment. It will happen, and it does not mean that you are not worthy of love—or that your next potential partner will react the same way.

Everybody has a herpes, sometimes literally, sometimes not. Consider this: One client of mine was terrified to tell her new partner about her case. After she told him, he breathed a sigh of relief and said, "I am so glad to hear that! I have it too! I have been looking for a way to bring it up with you!" 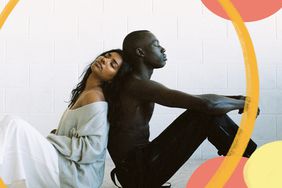