Fans are either appreciative of the storyline, or they're boycotting it.

One year into the COVID-19 pandemic, the world is finally starting to see a small light at the end of this incredibly long tunnel with the arrival of vaccines. But in the world of television that always lags behind real life, the coverage of the pandemic is just beginning.

Case in point is Grey’s Anatomy, which has stunned on the small screen since it debuted in March 2005. The show has become globally known for unexpected disasters that lead to the death of its main and oft most popular characters, as well as covering subjects like rape, mental illness, and the disorienting pain of grief. In the show’s 17th season which premiered in late October, the dominant subject is the COVID-19 pandemic — startling subject matter as the virus continues to ravage our everyday lives.

Grey's Anatomy Took on Rape — and Got it Really Right

The response has been polarizing. While some say it’s cathartic to see what’s happening across the country play out on the small screen, others have refused to watch the show. Some simply find it too hard or triggering to watch, preferring to turn to escapist TV shows right now — while others are boycotting Grey’s because they think the writers are “over-dramatizing” COVID. In other words, fans of the show are as torn about how Grey’s Anatomy is approaching the pandemic as civil (and sometimes uncivil) society seems to be in approaching its severity.

“I've been a fan for over five years,” says Jackie Correa, a Grey’s Anatomy superfan who frequently comments on the show’s Facebook page. “At first I was really enjoying it and it took my mind off things for a while, but this last episode was just too much and too real.” Without giving too much away, the latest episode involves one of the show’s protagonists and their ill parent who contracts COVID-19. “I live in Los Angeles and every day is worse than the last,” Correa reveals. “It's too depressing because it's too real.”

As a psychiatrist whose primary patient population includes frontline healthcare workers, Jessi Gold, M.D., was also a bit hesitant about Grey’s Anatomy’s portrayal of the pandemic — and she’s seeing those same mixed feelings in her patients.

“Some people say, ‘It's really important to me to see that someone cares, validates my experience, and I know that their writers are trying to echo our experiences in a realistic way,” she states of what she’s heard from some of her healthcare worker patients. “And then there’s another group that says, ‘I turned it on for two seconds and I was traumatized and I couldn't keep watching.’" She herself is a fan of the series, and admits this aspect of it feels incredibly realistic and emotional.

This isn’t the first time that either the small or big screen has attempted to reflect a modern-day catastrophe. Law and Order: SVU frequently takes on real-life events and the film Contagion has gained a whole new fanbase given how eerily similar the spread of the current pandemic feels in comparison to the H1N1 virus, which the movie depicts. But the timing is where the difference lies. SVU’s episodes often premiere months or sometimes years after an incident has already punctuated the public consciousness, and while Contagion may have been filming during the H1N1 pandemic, it wasn’t released until over a year after the pandemic was over in September 2011. To be watching the pandemic play out in front of our eyes both in real life and in fiction is an experience that is both triggering and unprecedented for many.

“It is a privilege to not have to deal with [COVID-19] every day because you're not in it, you don't have somebody who's struggling, or you don't have a family member who is dealing with it,” says Dr. Gold. “When healthcare workers stop, breathe, and the adrenaline settles and they remember that they're a person too and not a robot who functions on zero sleep taking care of people that are dying on an assembly line until they're told to stop, then they will ask, ‘How am I doing?’ Which they probably haven't asked themselves in nine months. And then at that point, they'll actually have to respond to that question with the answer being probably not well.”

This crushing exhaustion plays out in several Grey’s Anatomy storylines this season from Dr. Maggie Pierce’s daily retreat to a hotel to keep herself safe while juggling a long-distance relationship with her new boyfriend and her half-sister Dr. Meredith Grey’s fight against the virus, along with Dr. Miranda Bailey’s difficulty in finding space and time to grieve while she helps keep the hospital afloat.

There are also many fans who feel incredibly validated by this season of Grey's. “Thank you for so beautifully expressing what children of Alzheimer’s patients endure,” commenter Laura Self stated on the show’s Facebook page. “Both of my parents have it, my dad passed in April, and my mother was just diagnosed with COVID-19.” And for hospice nurse Alecia Davidson, episode five of the season couldn’t have been more true to life. “The difficult decision to push for treatment or promote comfort is my daily reality,” she commented. “This episode had me in my feelings the whole time.”

Dr. Gold has always believed that television and film have tremendous power when it comes to their depictions of science and healthcare. For everyday people to see characters that look like them in certain roles changes stigma and makes a difference. And she believes this will be especially crucial not just for healthcare workers like her patients, but for how we move on after the pandemic, specifically when it comes to mental health. “[The writers of Grey’s Anatomy] could walk viewers through what therapy looks like or how taking meds looks,” Dr. Gold proclaims. “When you have a platform like that, you can make a difference with how people talk and think about these things.”

The series is also laying bare stories about racial inequity in the healthcare system, which is headline news now as COVID-19 hits Black and brown communities hardest. “There is something about having your emotions reflected back to you,” Dr. Gold says. “It's not just that we want to see something happy, so we feel better. It's also if someone says you have a right to feel this way because that was hard or that is challenging or that this whole experience is truly traumatizing.” When something may be difficult to watch but it helps to normalize and validate what you’re going through, it can feel like a kind of therapy in itself. “I think it gives you a little bit of permission to feel what you're feeling and have someone say, ‘Everything you're experiencing is not normal in this world and right now this world is abnormal. You’re allowed to feel the full spectrum of feelings,’” Dr. Gold explains.

With COVID-19 vaccines beginning to roll out across the globe, only time will tell what comes of the pandemic and thus where the Grey’s Anatomy storyline goes next. Fifty-eight percent of Americans say they’ll get the vaccine when it’s available in a November Gallup poll (conducted before promising coronavirus vaccine announcements from Pfizer and Moderna), up from 50% in September. So perhaps the division we’re seeing rear its head in almost every facet of public life will soon come to end. No matter where the zeitgeist lands, we can be sure Grey’s will capture it. 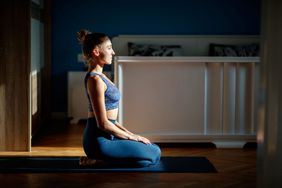