Plus, why 'wokefishing' — the political form of catfishing – is emerging on dating apps in response.

Sarah Levy is a writer based in Los Angeles by way of New York. Her first book, DRINKING GAMES, an essay collection that is part memoir, part social critique will be published by St. Martin's Press in 2023. Her work focuses on identity, relationships, and sobriety and has appeared in The New York Times, The Cut, The Washington Post, Cosmopolitan, Glamour, Refinery29, Teen Vogue, InStyle, and elsewhere.

It's no secret that 2020 has been tough on interpersonal relationships. The global pandemic has limited our ability to socialize, and now the current political climate is also impacting how we date. It makes sense: the upcoming presidential election feels particularly personal and almost impossible to ignore, even in casual conversation.

Getting political on dating apps isn't necessarily a bad thing. Popular apps like Hinge, Bumble, and OkCupid give users the option to disclose their political views in their profiles and share if they're registered to vote. According to new research from OkCupid, registered voters are 65% more likely to get a match and 85% more likely to get a message. In the past, disclosing your political leanings on a date might have led to healthy discourse or a friendly debate. But today, young daters are taking new approaches to ensure their partners align with their preferred politics from the get-go.

"Right now, politics kind of indicates your personality," says Emma*, 29, of New York. "My personal feelings about this president are super important to me. If someone is conservative, they likely won't get where I'm coming from. And in this election season, moderate is no longer moderate. They're likely good people, but I just don't want to waste my time on them. I'm just swiping no."

"I immediately don't match with people if they even say "moderate" on their profile now, whereas before I might have," agrees Connor, 25, from San Diego.

Other daters are taking a more direct approach to ensure Cupid hits in their favor. Martha, 36, from New York, makes it clear that she's anti-Trump right off the bat. "I have pictures from protests and rallies in my dating profiles."

"How is it possible right now to separate politics and dating? Maybe 15 years ago it was, but now I can't even imagine it."

Still, Martha has matched with the occasional Trump supporter. In these instances, she immediately ends the conversation — and explains why. Martha shares these exchanges on social media and has been surprised by the "crazy positive" comments she receives. "[The feedback] shocks me because I'm like, 'Is everyone not having these conversations?!' How is it possible right now to separate politics and dating? Maybe 15 years ago it was, but now I can't even imagine it."

Darby, 29, agrees. "These are things we just can't look past anymore in dating. I'm on Bumble in Atlanta and put something in my profile about being anti-Trump and that it is a non-negotiable for me. I'm getting way fewer matches than usual, and I can almost guarantee this is why," she says. "Atlanta has a lot of young people from very conservative families so unfortunately, my dating pool is now way, way smaller. But I'm glad I can get it out of the way before meeting people."

The Best Questions for a Virtual First Date

Many have created similar filtering systems on apps, instantly swiping left or ghosting anyone who has opposing political preferences. Perhaps in response to this perceived shift, a second trend is also emerging across dating apps. Dubbed "wokefishing" by Vice's Serena Smith, this political form of catfishing entails pretending to hold more progressive views to increase matches. The act isn't inherently sinister; some people wokefish intentionally, while others may possess a lack of understanding about what it means to be "woke."

"Guys are recognizing that a lot of women, especially in [more liberal cities like] New York, find conservative views unattractive," says Emma on the subject of wokefishing.

"Guys are recognizing that a lot of women, especially in [more liberal cities like] New York, find conservative views unattractive"

Isabel, 27, described a recent experience with mild wokefishing. After watching the presidential debate with someone she had been seeing for two and a half months, Isabel says his tone completely changed. "It became clear to me that he had been holding back how conservative he was in other conversations."

Isabel never saw him again after that night; he ended things a few days later. "I don't really know what his motives were. Maybe he was trying to figure out how strongly I felt." The experience has changed the way she approaches dating apps, she says. "My political beliefs were hidden [on my profile] before this, but they aren't anymore."

Two men who described themselves as centrists didn't support the idea of outright conning a potential date, but they understood why wokefishing has become more popular on dating apps in our 2020 political climate.

"I would prefer not to lie or misrepresent myself to get laid, but I understand the impulse. Desperate times call for desperate measures," offers Kurt, 31, from Los Angeles. "I feel like the pool has shrunk a great deal for me because of political extremes. I don't have a problem dating someone more liberal than me, but I get the feeling that more liberal people have a problem dating someone more to the right of them. Because of that, I feel like I often have to hide my political beliefs on dates, which I don't like doing."

Winston, 34, from New York shares a similar sentiment. "I don't think I would go as far as advertising a political view that I didn't have because that feels disingenuous. But when women put their political beliefs on their profile it does feel like virtue signaling. Having political beliefs is nothing new, but putting them out there publicly puts you at risk of someone using it to sleep with you or try to sell you something."

"If I happen to interact with someone who is a Trump supporter, it doesn't last long. I just exit the conversation without saying anything."

But it's not just women who are ghosting or filtering by politics. "If I happen to interact with someone who is a Trump supporter, it doesn't last long," says Max, 35, from Minneapolis. "I just exit the conversation without saying anything."

Winston says this is a shame. "The fact that you will only surround yourself with someone with the same POV is hugely problematic. You're defining people by their labels. It's much more interesting to have a political view and engage in a conversation about it on a date."

But is it really hugely problematic? "The three primary determinants for how people will click are proximity, familiarity, and similarity. So yes, dating someone with massively dissimilar values and core ideas about the world than you is probable cause for drama," says relationship and intimacy expert Shan Boodram. "If you're someone whose values really align with a particular party, then it's important to use politics as a screener for mates. If your values aren't aligned with a party, then I'd say it's problematic to avoid people just because they're not going with the crowd in your area."

"If you wouldn't want to be seated next to a chatty person who aligned with a different political party than you on a flight to Australia, then you shouldn't waste your time on a date with someone who's going to be voting for the opposite party than you. Or perhaps even worse, not voting at all"

Not sure which camp you're in? Shan offers this suggestion. "I'd say a good rule of thumb is if you wouldn't want to be seated next to a chatty person who aligned with a different political party than you on a flight to Australia, then you shouldn't waste your time on a date with someone who's going to be voting for the opposite party than you. Or perhaps even worse, not voting at all."

Emma already knows where she falls — and it's on the side of swiping no. "I want to be open-minded and not just associate with like-minded people, but that doesn't mean I have a responsibility to date them."

*Some names have been changed. 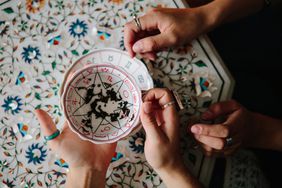