And you’ll want to embrace ‘em — even if they leave you reeling.

Leo season comes roaring in with a promise of boosting your confidence, self-image, and ability to own and use your voice. But thanks to a slew of planets currently hanging out in fellow fixed (aka stubborn-as-hell) signs this year, the fire sign's annual moment has been packed with joyful highs and frustrating lows.

Now, the Leo new moon, occurring at 9:49 a.m. ET/6:49 a.m. PT on August 8, will feel like a shock to the system that could spur you to be even more vocal about your needs and find a way to welcome productive change.

The new moon in Leo will fuel surprising change.

Leos are the spotlight-loving, action-oriented, charismatic leaders of the zodiac. The ruler of the fifth house of romance and self-expression, they're creative, theatrical, and exude a youthful, playful energy that Leo's audience — the one they're always vying for the attention of — can't help but find alluring. But as open-minded and imaginative as they can be, Leo is still the fixed one of the fire bunch, so they're just as stubborn and resolute as the other fixed signs (Taureans, Scorpios, and Aquarians) in their own right. And their tendency to struggle with budging — even when a shift is inevitable — could be challenged by this new moon.

The main connection the moon makes is a square — which is activating at best, challenging at worse — to Uranus, the planet of revolution, rebellion, inventiveness, and sudden events, currently moving through Taurus. In turn, you can expect the unexpected, and potentially, even shocking change. You may find you're spontaneously thrown off-course in a stunning way that leaves you reeling and rethinking your path.

But while Uranus does have a way of throwing a wrench in your best-laid plans, it's also known for supporting exciting breakthroughs. So an unexpected all-nighter with your partner or BFF could lead you to land on a surprising solution to a tough emotional situation, or a shake-up on the job might inspire you to dream up a plan B for hitting professional goals.

A 5-Month Long Retrograde Is Heading Our Way

Mercury and Jupiter can lead to inspiration — and overpromising.

If you're someone who never had to learn how to project while giving a speech or performing on stage because you're a natural-born loud mouth (hi, hello, it's me), then you're already well-versed on how big Leo energy manifests. And you can understand how any astrological event that takes place in the sign of the Lion would instantly serve to motivate us to be more assertive and mouthy, but that's amplified because the new moon forms a wide orb to messenger Mercury, which is also approaching an opposition with expansive Jupiter.

When the planet of communication faces off against our solar system's most ginormous planet that has a magnifying effect on everything it comes in contact with, it can feel like a caffeine jolt for thinking, planning, and self-expression. With Mercury in showy Leo and Jupiter in future-minded, inventive Aquarius, you might be flooded with inventive ideas that you'll instantly want to share.

Creativity, inventiveness, and lots of buzzy chatter are amplified around this aspect, but so is the tendency to come up with grand plans that aren't exactly pragmatic. So watch out for the tendency to propose something that's not possible to follow through on.

Being open to change — and doing the work — can make for beautiful results.

This new moon kicks off a lunar cycle that requires a check-in around August 22 when we'll get another Aquarius full moon as well as around February 16, 2022 when the full moon occurs in Leo. That's when you could find that any willingness to embrace change is paying off and resulting in more creativity, romance, and Leo-level fulfillment.

But August 2 marked the sun's annual opposition to Saturn, the taskmaster planet, in Aquarius, kicking up feelings of loneliness and restriction. And although it will be the rearview mirror during this new moon, we'll still be feeling the release of tension between the luminary and ringed planet. The message of their face-off is baked into that of this lunar event: You could have nonstop game-changing breakthroughs, but they'll amount to zero if you don't actually take action and put your nose to the grindstone.

As buoyant, pumped, and loquacious as this Leo moon could make you feel, its rewards will ultimately be a direct result of the work you're willing to put in.

Here, how this Leo new moon will affect you, based on your sign. (Pro-tip: Be sure to read both your sun and your rising sign, if you know it. If you don't, you can find it on your natal chart or via this CafeAstrology calculator.)

With the new moon in your fifth house of romance and self-expression, an eye-opening shift in your dating and love life could have you feeling fired up to talk more about your desires.

Your fourth house of home life is activated by this new moon, spurring you to make changes around domestic matters based on your needs and definition of security.

The new moon falls in your third house of communication, bolstering your curiosity and inspiring you to tune into your dreams for inspiration.

Falling in your second house of income, you might land on an exciting new way to work with friends and colleagues to boost your cash flow.

Your annual new moon could have you reflecting on your strategy for commanding the spotlight and crafting your public image. It could be time to change course.

Occurring in your twelfth house of spirituality, this new moon could intensify your dreams and inner work. In turn, you'll want to start preparing to take a major leap of faith.

With the new moon happening in your eleventh house of networking and long-term wishes, your focus will be on your friendships as well as groups and teams you associate with. It could be time to think about your comfort level and let that drive how much you're bringing to the table.

With the new moon in your tenth house of career, you've likely realized that it's time to move in a whole new direction professionally — and your closest one-on-one relationships will play an integral role.

The new moon is in your ninth house of higher learning and adventure, and you'll be inspired to get out of your comfort zone on a more regular basis. Exciting new work or wellness routines could be the key.

Your eighth house of emotional bonds and sexual intimacy is activated by this new moon, so you'll be craving deeper connections and romance rooted in substance. It might sound counterintuitive, but being in the moment could lead you in the right direction.

This new moon is happening in your seventh house of partnership, so your relationship with your S.O, a dear friend, or a close colleague will be under the microscope, and it could be time to come up with an inventive new approach to a shared goal.

With the new moon in your sixth house of routine, it's time to reimagine your daily grind while putting your health and well-being first. Standing up for what you need on the regular can make a major difference in how you feel — emotionally, mentally, and physically. 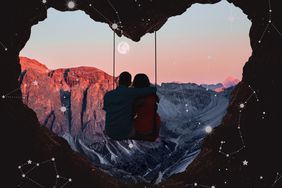