Aquarians, born between January 20 and February 18, live for building friendships and lending their forward-thinking energy to a variety of humanitarian causes. Ruled by revolutionary Uranus, Water Bearers are eager to use their wide appeal and significant networks to change the world. They're science-minded, progressive, and free-spirited, preferring to strike out on their own than embrace convention.

A Guide to the 12 Zodiac Signs

Looking for more insight on the forward-thinking, quirky fixed air sign? Find out below which celebrities are independent, friendly Aquarians.

The actress, producer, director, and activist, who stole our hearts as Olivia Pope (#RIPScandal), was born on Jan. 31 in The Bronx, New York.

A multihyphenate (singer, songwriter, record producer, dancer, actress, and philanthropist!) and one of the performers behind what was arguably the best Super Bowl performance of all time was born on Feb. 2 in Barranquilla, Colombia.

The Kick-Ass and Carrie actress was born on Feb. 10 in Atlanta, Georgia.

The actress, producer, and businesswoman behind everyone's favorite '90s haircut, "The Rachel," was born on Feb. 11 in Sherman Oaks, California.

Born on Feb. 10 in Minneapolis, Minnesota, the Black-ish and Grown-ish actress will turn the big 2-1 in 2021 and finally be old enough to order a glass of celebratory champagne if she wants.

The Emmy Award-winning actress, who starred in Orange Is the New Black and channeled Shirley Chisholm in Hulu's Mrs. America, was born on Feb. 10 in Boston, Massachusetts.

Up for three Grammy Awards this year, the singer, songwriter, and actor was born on Feb. 1 in Redditch, Worcestershire, England.

What's Hotter Than Harry Styles? Harry Styles in His Gucci Jumpsuit at Coachella
09 of 15

Born on Feb. 10, the Big Little Lies actress and filmmaker has taken home plenty of accolades for her work including an Academy Award, a Primetime Emmy Award, and five Golden Globe Awards.

The Black Panther actor, who is also a producer, was born on Feb. 9 in Santa Ana, California.

Born on Jan. 31 in Memphis, Tennessee, the singer, songwriter, actor, and record producer hit the scene as a kid on The All-New Mickey Mouse Club and later, member of NSYNC.

Born on Feb. 16 in Los Angeles, California, Mary-Kate and Ashley's younger sister has made a name for herself as an actress, starring as Wanda Maximoff / Scarlet Witch in superhero films set in the Marvel Cinematic Universe.

The singer, songwriter, actress, philanthropist, and former member of Destiny's Child was born on Feb. 11 in Atlanta, Georgia. 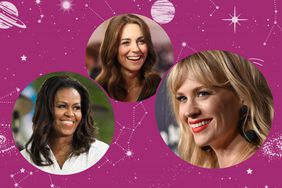