It's been less than a year since Kanye West and Kim Kardashian infamously and extravagantly tied the knot in a multi-day, border-transcending European celebration, but that isn't stopping the duo from commemorating their wedding in a big way. In his typical over-the-top fashion, West has reportedly rented out the Eiffel Tower—yes, the whole Eiffel Tower—to renew their wedding vows. And while renting out one of the most memorable landmarks in the entire world may just be the most extravagant way the rapper has shown his love to his wife, it's certainly not the first time he's gone above and beyond to do so. Keep reading for the 7 most gradiose ways West has showed his undying adoration to Kardashian:

Renting things out is not new for West. When he popped the question, the rapper rented out AT&T park in San Francisco and proposed to her in front of her entire family with a 90-piece orchestra playing in the background.

A month later, West released the music video for "Bound 2," with Kardashian front and center though much of the video.

For Christmas 2013, West commissioned one of his favorite artists, George Condo, to customize an Hèrmes Birkin bag for Kim.

For Mother's Day of the same year, West surprised his bride-to-be with a wall of white roses in their backyard.

On her 34th birthday, Kardashian was gifted another painted Hermès bag. However, instead of being customized by a famous artist, this one was the work of the pair's daughter, North West.

Just last week, West surprised Kardashian with "a couple thousand" white roses in her hotel suite in Brazil for Mother's Day. The same night, Mrs. West headed to a local restaurant, where her husband had arranged for a string quartet to play Sam Smith for her. Aw! 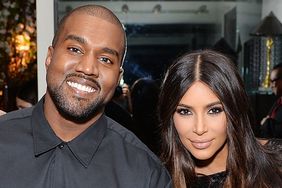