Julia Roberts and her latest red carpet look just took her friendship with George Clooney to the next level.

On Sunday, the actress arrived at the Kennedy Center Honors in Washington, D.C., wearing a custom Moschino gown that was entirely dedicated to her BFF. Paying tribute to Clooney — who was among one of five honorees at last night's ceremony — with her statement-making outfit, Roberts wore a black floor-length dress covered in gold-framed photos of the actor throughout major moments in his life and career — including his ER era, his artsy 2013 W Magazine cover, and more. Roberts paired the gown with a cropped black blazer and Chopard jewelry.

Her auburn waves were styled loose over her shoulders with a middle part, and she finished off her glam with a generous swirl of blush, a pink lip, and glowing skin.

Julia and George first worked together on the film Ocean's Eleven in 2000, and ever since, they've been frequent co-stars and friends for the past two decades. Speaking of their longtime friendship, Clooney previously told People, "The minute we met, we had fun. The beauty is, when you work with people who take their work seriously and don't take themselves seriously, and that's really fun." Roberts, meanwhile, knew they would be friends the moment that they met — "I thought, 'He's going to be a pal.'" 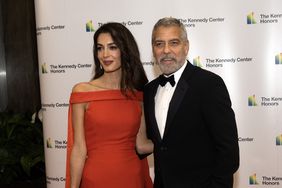 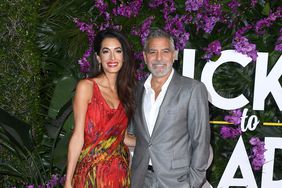