How does it feel to live my dream?

While Julia Roberts has no shortage of famous family members and A-list friends within her inner circle (see: Emma  Roberts and George Clooney, to name a few), the actress recently discovered one surprising familial connection that goes much, much further back.

On Tuesday’s season premiere of Finding Your Roots With Henry Louis Gates Jr., both Roberts and fellow actor Edward Norton found out that each of their family trees at one point intertwined. At one point in the episode, Gates walked both of the actors through their family history before revealing that they actually share a distant cousin.

Julia Roberts Revealed The Hospital Bill for Her Birth Was Paid for By Martin Luther King Jr.

“You and Ed share a long, identical stretch of DNA on your ninth chromosomes," Gates told Roberts. "This means that you inherited this shared DNA from a distant ancestor, somewhere in the thick of this family tree.”

“How come I didn’t get the teeth and the smile?” Norton joked.

Elsewhere in the episode, the Glass Onion actor also discovered that the iconic historical figure Pocahontas and her husband John Rolfe were actually his 12th great-grandparents. “This is about as far back as you can go. Unless you’re a Viking” Norton said in a separate clip. “It just makes you realize what a small piece of the whole human story that you are.” 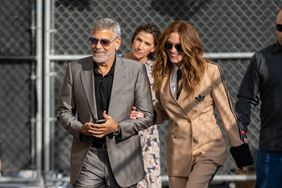