She came dressed to slay — and win.

Jessica Chastain is no stranger to shutting down red carpets (or receiving accolades during awards season), and the actress stunned again in a glitzy Oscar de la Renta gown at the 2023 Golden Globes.

Taking Taylor Swift's "Bejeweled" to heart, Chastain hit the ceremony's red carpet in a slightly sheer tan column gown (which featured a strapless neckline) covered in a silver sequined spiderweb-esque design. The actress added a single Gucci ring to accompany her already-dazzling dress, and she tied her red hair back into a simple slicked-back low bun. Much like her gown, Jessica's glam looked equally as neutral for the occasion, comprised of a light pink eye look and a mauve lip.

This year, Chastain is being recognized in the Best Actress in a Limited Series or Motion Picture Made for Television category for her portrayal of country singer Tammy Wynette in Showtime's George & Tammy. The Oscar-winning actress is among good company with Julia Garner, Amanda Seyfried, Julia Roberts, and Lily James all nominated, as well.

Last awards circuit, Chastain received praise (and an Academy Award) for her portrayal of televangelist-singer Tammy Faye Bakker in the filmThe Eyes of Tammy Faye. The actress recently told Vogue that there were actually some similarities between the two Tammys. “They are both women doing extraordinary things in an environment that suppresses them," she explained. "Women who are defined by the men in their lives and break free from that.” 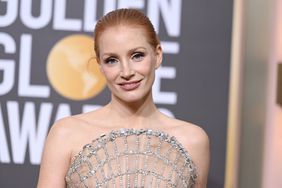 Mermaidcore Was Arguably the Dress Code for the 2023 Golden Globes