That is, if your grandma wears head-to-toe Dior.

Ever since becoming a mom to her 8-month-old son Cy, Jennifer Lawrence's official public appearances have been few and far between. In fact, she only returned to the red carpet just last month. But it appears as if the actress is finally ready to step back into the spotlight full-time, with her triumphant arrival at the European premiere of her new film Causeway at the BFI London Film Festival yesterday.

At the event, J.Law highlighted her sophisticated style while reimagining a jewelry classic. Wearing a black high-neck gown with a sheer fishnet overlay covered in pearls, the actress proved that the grandma-friendly staple can also be cool. Doubling down on this theory, Lawrence accessorized with chic pearl drop earrings, as well as a pair of simple black sandals with a heel. Her blonde hair was scraped back into a messy low-slung bun, while the rest of her glam consisted of a smoky eye, dewy skin, and a glossy pink lip.

Hours earlier, J.Law declared her support for the fancy grandma trend once again when she was photographed exiting her London hotel in a black shift dress, a satin black clutch, and matching strappy sandals.

During the film festival's "Screen Talk" series on Saturday, Lawrence opened up about the success of the first Hunger Games film and how it affected her identity as an actor. “I think I lost a sense of control,” she explained. “Between The Hunger Games coming out and winning the Oscar [for 2012’s Silver Lining Playbook], I became such a commodity that I felt like every decision was a big, big group decision. When I reflect now, I can’t think of those following years, [because there was] just a loss of control.”

As for her upcoming film Causeway, she said, "It feels personal for me for the first time in a long time." 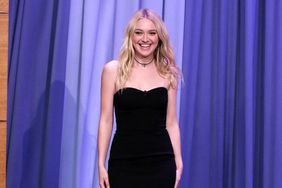