Let’s take a moment—what with today being World Egg Day and all—to celebrate the humble egg.

Foundational, functional, and flexible, eggs are not only significant providers of protein on their own, but they’re also total team players holding together countless dishes, both sweet and savory.

And who better to discuss the incredible, edible egg with than Sarah Schneider, co-owner of N.Y.C.’s Egg Shop, which, in the span of three years, has opened locations in both Manhattan and Brooklyn and released an egg-centric cookbook. We connected with Sarah to talk everything egg ... and to find out what her ideal egg meal is.

WATCH: How to Make Squash Egg-in-the-Hole

How many eggs do you use a week, between your two Egg Shop locations?

You’re going to freak out. We go through almost 9,000 eggs a week between the Nolita and Williamsburg restaurants.

Where do you source your eggs?

The Amish Farm Collective in Pennsylvania. They’re all organic and free range, which is really important to us.

Your menu is almost all egg. What happens, if for some reason, you run out?

We’re lucky enough that both restaurants are near Whole Foods Markets, so there have definitely been times that we’ve had to run out to the store and buy tons of eggs. It’s not ideal, obviously. But it has happened.

This One-Bowl Supper Recipe is Healthy Yet Super Filling

What was the inspiration for opening the first Egg Shop in Nolita in 2014?

This was very much a big dream and not something I truly thought would happen because it was so out of my ballpark. I had a career in fashion for 14 years, working on the wholesale side of denim. The concept came from a need—a lull in the market.

When I was in my '20s, living in New York, eggs were really accessible to me because they were inexpensive. So they were something I could afford that I could go really healthy with or really indulgent with. And as I got older and still loved eggs and got more conscientious of where things were coming from, I thought, I don’t understand, why isn’t there a place that just does eggs? It became a running joke with my friends because I talked about it with them for four and a half years. The fact that it’s actually become a reality and we have a second location and a cookbook is kind of mind blowing.

How did you go from the idea to actually opening a restaurant?

I had good people around me who believed in the idea. My boyfriend at the time, who’s now my husband, Demetri Makoulis, and then our now-partner and chef Nick Korbee. Getting him was a game-changer because to have someone who was working in food and had been trained in food believe in the idea ... it gave me the confidence to move forward with it. But it was terrifying. The week we opened I was like, is anyone going to show up? But they did.

This Decadent Mushroom & Eggs Scrambler is All You Need This Weekend

How did you go about building the menu?

I thought it was really important to give everyone an option on the menu. So if you look at the menu, you can be really hung over and indulge yourself or eat really clean and be healthy. Funnily enough, our two most best-selling items are our BEC, which is our spin on a bacon egg and cheese, and then our Spandex bowl [a poached egg over quinoa, mixed greens, quinoa and pickled vegetables]. One is super healthy and one is exactly what you’d expect, which I think is awesome. It shows how people really eat.

Just throwing an egg on toast with avocado is the most delicious, healthiest thing. It’s my go-to. 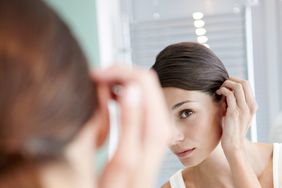