Every year New York City's department stores go above and beyond to create dazzling holiday displays in their storefronts. Barneys' motto may be "Taste, Luxury and Humor" (according to creative director Simon Doonan), but that doesn't mean the upscale retailer can't be conscientious as well. Doonan, who has created Barneys' trademark windows since the '80s, took an eco-trip for their presentation this year to be the first "green" window in the city's history.

Doonan, the mastermind behind the aluminum Rudolph the Recycling Reindeer, mused about collecting the cans needed to create the scene: "We window dressers went to all the recycling centers in dodgy areas of town to get the cans." When setting up the display, they don't put up curtains, allowing passers-by to see the work in progress.

Four years ago, Saks decided to make the snowflake its annual theme, which has tested the team's creativity. "The challenge has been to try and reinvent that experience within the windows for the person on the street," says Tim Wisgerhof, Window Director for Saks Fifth Avenue. With giant glowing flakes scaling the front of the store, the windows are only part of the display. And when mother nature complies with a dusting of snow down Fifth Avenue, it's always appreciated.

This year the department store expanded the theme of the Frosty-filled windows by incorporating it into a children's book, Snowpeople. Part of the book's proceeds go to to St. Jude's Children's Hospital.

Highly experienced artists? Who needs 'em when you can get creative wonders from the city's youth. The Bloomingdale's team asked kids to develop art corresponding to their holiday dreams. "Instead of typical things like Santa and elves, we have a wicked witch who runs a candy factory, an alien queen in a snowball fight and a snow cobra playing hide and seek," says Joseph Cotugno, VP of visual merchandising. The kids ideas acted as the springboard for the team to develop the jolly displays.

Viewers who pass by the vivid windows on Lexington Avenue and 59th Street can see the children's original artwork and watch recorded interviews of them talking about their imaginative holiday dreams, like a five-eyed, two-lipped woman.

"When I first presented the idea of building a roller coaster in the windows, my production team thought I was crazy and said it couldn't be done," says Paul Olszeswki, director of windows for Macy's Herald Square. But it was, and the result is an exhilirating wintery ride along 34th Street.

No, this photo isn't upside-down. It's just Santa's view from outer space in one of Macy's most playful and wild displays ever.

Inspired by the work of Hollywood designer extraordinaire Tony Duquette, Bergdorfs adorned their windows with the five elements, depicting air, water, fire, earth, and light in a Duquette-esque fashion full of glitter, glimmer and decadence. And in the upscale retailer's style, the scenes are far from ostentatious; they are merely refined and tasteful, especially the water-themed window (left) that features millions of seashells, creating a mosaic that covers the entire display.

These opulent windows combine a classic feel in the decadence with a modern edge, supplied by the madcap situations the mannequins are found in.

Few events tap into our senses like the holidays do, which is what Lord & Taylor captures with its window display. "It's about how we experience Christmas through our senses-how it smells, feels, tastes, looks and sounds," explained Manoel Renha, VP and creative director of Lord & Taylor's Fifth Avenue Windows.

The 181-year-old retailer's windows always display a meticulously put together historical era. "Each window reflects the decor, the clothing and the attitude of whatever period it portrays," says Renha. "We do extensive and painstaking research to depict it with authenticity." This year, the tastes, smells and sounds from the turn of the 20th century come alive in their windows along 5th Avenue in midtown Manhattan.

In a Nutcracker-like vision, the team at Henri Bendel interpreted dreams and fantasties in their makeover of the signature brown-and-white stripes of the store's exterior. The display, which took more than 170 hours for the team to complete, dazzles with silver, gold and Swarovski crystals throughout.

Among the fantastical elements are a giant gold-leaf tea cup pouring crystallized Swarovski pieces, with a mannequin gliding by above a gold-leaf boat filled with overstuffed pillows. It may not be a vision of sugarplums, but it is a holiday dream in the midst of bustling Fifth Avenue none-the-less.

In the holiday spirit now? See what else you can find right here!
From great gifts to fashion and beauty ideas, this is your stylish holiday headquarters! 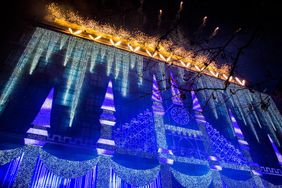 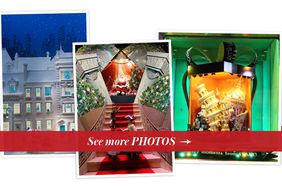 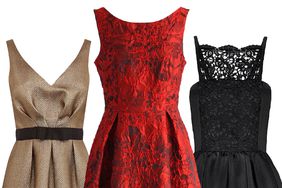