For three years of my life in the mid-00's, I would get up in the wee hours of Thanksgiving to leave my house by 4 a.m.—not to cook or baste a turkey but to trek into the city from Hoboken, NJ, for a chance to be in the annual Macy's Thanksgiving Day Parade.

I was working for TV Guide at the time, and they had offered up the opportunity, so I jumped on it. I'd watched the parade every year with my parents growing up in Maine and couldn't resist. Even if that did mean getting up and into NYC long before any Starbucks was open to ply me with caffeine.

The Best and Worst Holidays of the Year: InStyle Editors Battle It Out

I'd head to a hotel near Penn Station, where there were hundreds of rooms filled with bright costumes for clowns, balloon carriers, and other float riders. I'd head to the room for my assigned balloon and look for my name. I'd put the costumes on over thin layers, and leave any outer wear at the hotel. My first year I was assigned to carry the Big Bird balloon, and let's just say, yellow is not my color. I was decked out in a bright-as-sunshine yellow jumpsuit and hat, with a red bib decorated with musical notes. It was definitely not the most flattering look. I was really grateful the year I got the Where the Wild Things Are balloon and was given a black jumpsuit with a tan bib instead. (Fashion!) Kermit was my favorite, because I look great in green.

Once in our gear, we'd get bussed up to the start of the parade route, up along Central Park West. The balloons are already inflated the night before and kept under gigantic nets. We'd get there a few hours before the parade started for instructions and to make sure we were in our places long before the kickoff. I always took this time to wander and look at the floats that were lined up, ready to go, and to find a cup of hot coffee. Hot because most of the time (even on a nice day), it is still pretty darned brisk at 7 a.m. in November, usually with temps in the 20’s or 30’s. One morning as I passed Penn Station, a clock that also stated the temperature read “11” but it warmed up later, and I was personally spared any sub-zero temps.

How to Survive the Holidays When Your Relatives Are Trump Supporters

Around this time, you'd hear the balloon team leaders asking a lot of questions about the wind gusts and if the balloons would actually be allowed to go. They always let us participate the three years that I did it, but one year, when I was carrying the the Where the Wild Things Are balloon, we were instructed to keep it floating low, just above our heads. There were about 50-100 people on any given balloon, all in the same matching costumes. Most of the people I met were excited to be there. I loved meeting the clowns who stayed in character.

Before I'd know it, the few hours had flown by, and I'd be holding onto my string of the balloon by leaning on a little bone shaped piece of plastic at the end of a rope (like a kite string on steroids) and putting my weight on it. Balloon handlers have a minimum weight requirement, and if you look like a waif thin, they won’t let you do it. You’ve got to have enough weight (though when I did it, I believe the requirement was around just 125 lbs.) to keep yourself on the ground and hold down the weight pull of the balloon as well. Even at my larger size, there were times I’d almost feel like I was being lifted off the ground. Depending on the size of the balloon, sometimes they’d even put two people on each cord to evenly distribute the weight of the balloon to keep it from escaping. (This was the one time in my life I felt like the extra pounds I carry around really paid off!)

Once we'd get going, it was like a blurry, almost-5K run, as I'd trek down the 2.5-mile parade route at a fast walk/run. There is quite a bit of sprinting through the intersections, where the buildings aren't there to protect the balloons from the wind. Spots like Herald Square and Columbus Circle are particularly tricky as the balloon sways wildly with the wind. I would definitely feel like I was being pulled along like Mary Poppins. I for sure lost my footing a bunch and would trip over my own feet. One year my coworker Malinda and I were paired together on one string for Big Bird, and we kept each other stable. But the intersections were the most stressful for the handlers and leaders because these transition spots with the wind made it more likely the balloon could hit an obstacle, like a building or a lamp post. One year I was doing it, there was an unfortunate accident with a street pole and some onlookers got injured but not on the balloon I was carrying, and I didn’t hear about it until much later.

Set Your DVR for These Thanksgiving-Themed TV Specials

Along the way I'd happily wave to the onlookers, who were always super happy to see the different balloons. I never did get to appear on TV, as the balloons that look like they are effortlessly floating are the big stars, not the sweaty people in coordinating getups running underneath them.

After the parade route ends, the floats go off in one direction, and the balloons in another. There are big canvas mats, where they place the balloons, open their flaps, and release the helium. Us handlers would get to lay on top of them to help squeeze the air out at a rapid pace. We’d be reminded to be extra careful as each balloon costs millions to make. But even with the caution, falling on the pillow of air was always the highlight for me.

Then back to the hotel to return the bright costumes and to hit the train to make it home by 1 p.m. for an extra piece of pumpkin pie … or two. 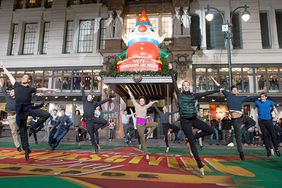