"I might lose my job if I told you who."

Cobie Smulders's Robin Scherbatsky isn't the only How I Met Your Mother star coming to Hilary Duff's spin-off, How I Met Your Father. In a new interview, Duff said that fans can expect another beloved character to come back as the show preps to drop its sophomore season. However, like any well-seasoned vet, Duff didn't reveal too much. All she said was that it was a "dream come true" to work with whoever's set to return to the crew and that she hoped that eventually, she'd love to have everyone from the original series join in on the fun.

"I think I might lose my job if I told you who, but we do have a special guest from the original cast coming this season," she said on Good Morning America. "It was a dream come true working with them. I think our dream would have the entire cast come through at some point."

How I Met Your Mother ran from 2005 through 2014 and starred Josh Radnor, Jason Segel, Alyson Hannigan, and Neil Patrick Harris.

Earlier this month, Hulu dropped a teaser for How I Met Your Father season 2, revealing that Sex and the City alum John Corbett would be joining his former co-star Kim Cattrall. He's set to play Duff's love interest. The show's executive producer, creator, and writer noted that it was a fun idea that they managed to pull off, adding that it's not the first time that Duff and Corbett have worked together.

"Honestly, we started from a place of who would be the most fun for the role and you know, we were, as we always do, batting around ideas with the writers," Elizabeth Berger told TV Insider. "And then the idea of Corbett came up, and we all just thought that was so exciting. Then as we sort of got further along in the process, we were like, 'Oh, right, cool, he did this movie with Hilary a million years ago.' And then we thought, 'Is that weird?' And then we thought, 'No, it's awesome.' Hilary's a grown woman now and everyone can handle it." 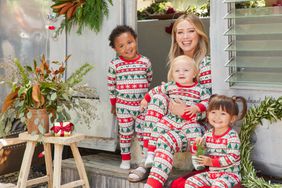