From her iconic shag to her signature bronde blowout, the actress's mane is legendary.

Christopher Luu
Christopher is a Southern California-based editor and has been with InStyle since 2018. He covers all things entertainment, celebrity, and culture.
InStyle's editorial guidelines
Trending Videos

Hair icon Jennifer Aniston may be best known for her '90s "The Rachel" haircut, but those choppy layers aren't the only trend that she's introduced to the masses. During her 30-plus-year career, Aniston has sported a number of styles, experimenting with length, texture, and color — sans bad hair days, might we add — and inspiring others to follow suit.

Pre-Friends, Aniston boasted brunette locks (her natural color) with the '80s most in-demand add-on: bangs, albeit subtle. Not so subtle? Her mane's mega volume.

If You Have Flat Hair, Read This To Get Some Extra Volume
02 of 11

Superstar stylist Chris McMillan gave Aniston what would become her trademark 'do: The Rachel. After the cut made its debut, it skyrocketed to one of the most popular styles, ever. Just about everyone brought a photo to their stylist, asking for Rachel Green's shoulder-length swingy layers and honey-gold highlights.

When Aniston started dating Brad Pitt, she let the layers grow out and experimented with texture, embracing beachy waves and toning down the chunky highlights for a more natural, sun-kissed style.

At the turn of the century, Aniston grew her hair out long, went lighter in color, and took to the flat iron. The occasion? Her wedding to Pitt.

Later that year, she'd surprise us with a huge chop, going from her longest-ever to her shortest-ever cut. The just-below-the-chin bob with wavy texture and feathered ends do wonders for her diamond face shape.

Aniston stepped out in what would become her go-to style for the next decade and went "bronde" before "bronde" was even a thing. She'd wear the blonde and brunette hue long and straight with only a few well-placed face-framing layers, for years to come.

When she took home the Emmy Award for Best Actress in a Comedy, Aniston changed things up and went wavy. To get her undulating style, invest in a texturizing spray.

Aniston brought back her bangs, though they were a more updated iteration than her '80s fringe. This side-swept style brushes past her eyes, working to highlight them.

Much like she did with bronde, Aniston set a new trend when she premiered her lob in 2011. In this case, it was slightly longer in the back and tapered up to her signature face-framing layers in front.

Sombré was everywhere in the late 2010s, which meant that the dip-dye style also made an appearance on Aniston when she honored McMillan with an InStyle Award.

And when she shifted from comedies to drama with HBO's The Morning Show, Aniston ditched her honey highlights for a slightly darker shade. The strategic layers and money piece highlights are ace at framing her face. 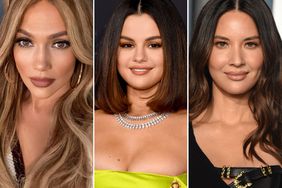 10 Celeb-Inspired Ways to Do Brown Hair With Blonde Highlights