Thanks to Gigi Hadid, you're going to erase the mental images of the tight pigtails your mom used to style your hair in as a preschooler. The model was seen on the New York streets with her bronde hair woven into two loose plaits that were left untied at the ends.

Known for her bombshell blowouts and high ponytails, we can always count on Hadid as our go-to source for beachy hair inspiration. Although Hadid has worn her hair in braided pigtails in the past, her latest take on the style has a grungy rock-and-roll spin. Topped with a black-and-white bandana, her pigtails channeled '80s-era Guns and Roses frontman Axel Rose rather than Victoria's Secret runway model.

I Want Every Accessory on Gigi Hadid's Body

Even though Hadid's pigtails are a stage dive from the rotation of hairstyles she's been wearing as of late, the look still has the model's signature laid-back vibe that we all try to emulate. And if this departure from a beachy, athletic look marks a turning point the styles we're going to come to expect from Hadid, she has decades' worth of rock icons to get inspiration from. 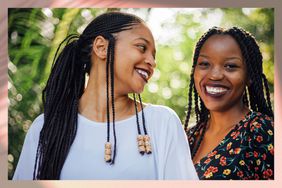