Presenting your new favorite way to rock a half-up, half-down hairstyle. You can thank Ashley Graham, who wore an easy, but still incredible look to her latest lingerie collection launch in Las Vegas.

Instead of wearing a half-up topknot, Graham pulled the majority of her strands up into a tousled, messy twisted bun—the effortless chic kind you wear when you’re washing your face at night—and left a large section near her face down. That section of hair was loosely curled and laid over half her forehead, creating the effect of long, side-swept bangs. We're calling this Hollywood's next big hair trend, as Gigi Hadid recently wore a style that looked nearly identical to this.

VIDEO: 6 of the Best Drugstore Finds Under $15

The look was created by celebrity hairstylist Justine Marjan, a pro who regularly work with stars like Khloe Kardashian and Olivia Culpo. We don’t have the exact breakdown on how Marjan mastered Graham’s undone updo, but here’s how we would get it at home. First, we’d add in textured waves to our hair using a curling wand like ghd Curve Creative Curl Iron ($199; nordstrom.com). Then, gently break up the waves using your fingers and spritz in a non-sticky texturizer like TRESemme Perfectly Undone Sea Salt Spray ($5; target.com). Separate the front section of the hair and sweep it up into a messy twisted knot. Touch up the front section of hair if needed—carefully—with a curling iron.

Remember, don't think too hard when creating your knot. You want it to feel undone, so pull your hair up just like you would before a marathon Netflix session. It's that easy. 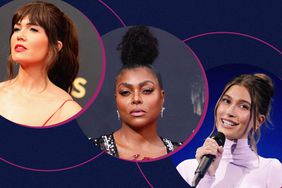