The haircut is still a (virtual) red carpet beauty trend.

Along with birthday parties, happy hours, and meetings with your boss, award shows have moved online this year.

While watching the 2020 Emmy Awards has been unlike any award show in history, some things haven't changed: the bob remains one of the biggest red carpet beauty trends — even without an actual red carpet.

Kerry Washington debuted a sleek chin length bob during the virtual award show and showed off her look on Instagram.

Washington's new length was styled sleek and straight with a deep side part. The actress credited her entire glam team in the post, including celebrity hairstylist Kim Kimble in the tags. So, odds are this '90s-inspired look is her work.

The takeaway? There's still no better place to debut a new haircut than an awards show — even if you're attending over Zoom. 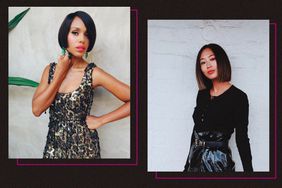 The "Sliced Bob" Is Going to Be Everywhere This Winter