First of all, his career began at age nine.

Fashion lovers — especially those with a passion for pairs of shoes that are pieces of artwork as much as they are footwear — tend to perk up at the mention of Salvatore Ferragamo. So you can imagine the excitement when Italian film director Luca Guadagnino announced that his 2020 biopic on the iconic shoemaker, entitled Salvatore: Shoemaker of Dreams, will be released in the United States later this year.

The documentary aims to answer the most popular questions fans of the label have asked over the years and touches upon the biggest moments in the luxury designer's life. Its updated trailer gives viewers a glimpse at some of the shoemaker's most iconic shoes, showcasing his various claims to fame that, at the time, piqued the interest of Hollywood stars like Marilyn Monroe and Audrey Hepburn.

But who is Salvatore Ferragamo? And how did his dreamy luxury heels lead to a much bigger fashion house, full of ready-to-wear clothing, purses, and more? Ahead, we've rounded up a few facts about the shoemaker, whose legacy and vision still live on today.

Who is Salvatore Ferragamo?

When was Salvatore Ferragamo born?

Salvatore Ferragamo was born on June 5, 1898, in Bonito, Italy to Antonio and Mariantonia Ferragamo. He was number 11 of the 14 Ferragamo children.

What was Salvatore Ferragamo's first pair of shoes?

Some people struggle to figure out their career path. Others, like Salvatore Ferragamo, know exactly what they want to do from a young age. Ferragamo's father was none too keen on his son's aspirations, but that didn't stop the budding designer from watching the local shoemaker perform his craft.

His studying would prove beneficial the night before his sister Giuseppina's first communion, when he made her a pair of white shoes to wear to the church. At only nine years old, Ferragamo was already a craftsman.

When did Salvatore Ferragamo open his first shoe shop?

After making his sister's shoes, Ferragamo went to Naples to study shoemaking when he was only 11 years old. Not long after, he returned to Bonito and opened his first shoe shop (of which he was the youngest employee). This was the beginning of what would one day become a luxury house worth billions of dollars.

When did Salvatore Ferragamo come to America?

Ferragamo emigrated to Santa Barbara, California in 1915, where he reunited with three of his brothers, Alfonso, Girolamo, and Secondino. He became a citizen in 1926.

Did Salvatore Ferragamo go to college?

Ferragamo attended the Extension Division of the University of Southern California in Los Angeles. There, he studied anatomy and learned that the arch of the foot supports the weight of the body. This nugget of information made a lightbulb go off in the designer's head: Shoes needed to support the foot's arch, which was a concept he'd apply to his designs moving forward.

How did Salvatore Ferragamo become famous?

Ferragamo's first gig was crafting the perfect cowboy boot for the serial film The Diamond from the Sky. From there, he went on to open a brick and mortar on State Street in Santa Barbara, and his most loyal customers were famous actresses like Lottie and Mary Pickford and the Costello sisters. He'd go on to be commissioned for a number of Hollywood films, make friends with a number of famous directors and stars, and, in February 1925, open a store on Hollywood Boulevard.

When was the Ferragamo brand founded?

Technically, Ferra-Gamo Incorporated was established in 1926 in Hollywood. Salvatore Ferragamo S.p.A., the luxury brand, was founded in 1927 in Florence, Italy.

What was Salvatore Ferragamo's most famous design?

You can thank Ferragamo for popularizing the wedge heel. It was the designer's brainchild birthed from a lack of materials during WWII when steel was commandeered by the army. Rather than make the shanks that made his shoes stand out from the rest, the designer used Sardinian cork to fill the space between the heel and ball of the foot for support. It was cute, comfortable, and an instant hit.

Who was Salvatore Ferragamo married to?

When did Salvatore Ferragamo die?

The luxury shoe designer passed away on August 7, 1960. He died of liver cancer, and his company was turned over to his wife. His daughters, Fiamma and Giovanna, also joined the family business, and the house has since expanded into eyewear, watches, and ready-to-wear clothing. 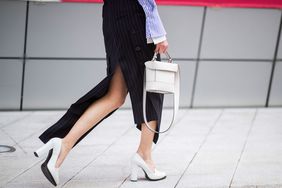