We're pretty sure Taylor Swift is going to accept a few moon men at Sunday's MTV Video Music Awards (she has nine noms!), but the jury is still out when it comes to what she will be wearing. Since her first ever VMA appearance in 2008, the singer's style has evolved every year, as she began to trade in her girly minis for more streamlined and sophisticated looks. Just last year she pushed her fashion boundaries to new heights with a quirky alphabet-printed Mary Katranzou romper.

According to her stylist, Joseph Cassell, it's Swift's air of confidence that helps her pull off the riskier choices. "Taylor has such a clear vision of who she is and how to reflect that in what she wears," Cassell told InStyle in 2014. "She isn't afraid to try new things, like combining separates in a cool way or choosing accessories that are interesting or different."

We can't wait to see what she picks this Sunday (and if boyfriend Calvin Harris will coordinate with her)! Check out her VMA style transformation below.

For her first time at the VMAs, Swift hosted MTV's pre-show in a sequined mini dress which was cute and age-appropriate for the then-18-year-old. These days it's hard to catch the 5-foot-11 star without heels on, but simple black flats were her go-to while she was on camera. Maybe she didn't want to tower over the Jonas Brothers when she interviewed them?

After her hosting gig was over, Swift changed into a feminine beige bustier dress by KaufmanFranco and Giuseppe Zanotti sandals.

Before that infamous run in with Kanye West on stage, Swift hit the red carpet in a one-shoulder KaufmanFranco beaded gown and her signature crimson pout. "Red lipstick gives me power," she told us.

After winning her first Moon Man for Best Female Video ("You Belong With Me"), the singer changed into a vintage red cocktail dress. "She has a way of wearing a garment that might be 50 years old and making it completely modern and relevant," says her stylist.

To perform "Innocent," Swift kicked off her shoes and sang her heart out in a nude strapless D&G number that looks very similar to her KaufmanFranco dress from 2008.

After skipping the 2011 show, the star switched it up in 2012 by choosing a white silk crepe tuxedo jacket and tailored pant by J. Mendel. "The idea for the suit originally came from Taylor and her stylist, Joseph Cassell," says designer Gilles Mendel. "It was the first time she ever wore a suit on the red carpet and they challenged me to come up with something that would look sexy and glamorous, but extremely refined."

In a plunging Hervé Léger by Max Azria bandage gown and Lorraine Schwartz jewels, Swift showed she was all grown up. That night, she also took home Best Female Video for "I Knew You Were Trouble".

Last year, Swift got playful in a blue alphabet-printed romper by Mary Katrantzou. "The calligraphic letters that float across the lace are actually inspired by turn-of-the-century school books, which felt appropriate because her songs have such a strong sense of narrative," says Katrantzou. "She wore it with such confidence, and she had the best legs that night!"

Taylor Swift wore a top and pants by Ashish, shoes by Christian Louboutin, rings by Ofira, and earrings by Lorraine Schwartz. 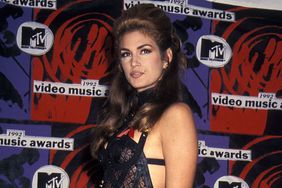 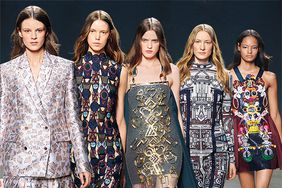