We're obsessed with look-alike mother-daughter moments. Obsessed. (See celebrity proof: Gwyneth Paltrow and Apple, Demi Moore and Rumer, Reese Witherspoon and Ava.) But dads can have their moments, too! Dads can impart knowledge! And play a big part in influencing style! The latter is especially true when dads have serious fashion cred. With Father's Day right around the corner, we're not only showering them with gifts, but we're also honoring all the times celebrity dads passed down their sartorial sensibilities to their famous daughters.

We named several rockstar dads (and one eternally hip granddad) whose fashion personalities have gone down in history for stealing the spotlight, and matched them to their famous daughters (or granddaughter). The result? Uncanny style similarities. From Georgia May Jagger to Liv Tyler, keep scrolling to see the style lessons these offspring have learned from their famous fathers.

Lesson: Toughen Up with Distressed Fabrics and Chains

The rockstar DNA clearly runs in the Kravitz family. Lenny has a longstanding preference for layered chains and distressed clothing. For Zoe, that tough combo emerges in the form of destroyed knits and edgy body chains.

Lesson: Get Wild with Leopard Print

Steven Tyler is fearless with prints, and, evidently, Liv Tyler is too. He wore a lace-up, leopard-print top on stage at an Aerosmith concert in 1976. Cut to 2015 and she topped off her denim ensemble with a wild statement-making coat.

Lesson: Don't Be Afraid to Take the Plunge

Mick Jagger was often in various stages of undress during The Rolling Stones performances. And when he wasn't, he wore scandalously low down-to-there necklines. Model Georgia May got the memo 40 years later when she wore a velvet jumpsuit that was cut down to her sternum.

Lesson: Get Sporty with a Bomber Jacket

Mick Jagger toughened up a tee with a perforated leather bomber in 1977, while Georgia May gave her classic LBD a downtown-cool edge with a silky maroon style last year.

Lesson: When in Doubt, Rock a One-Piece

Elvis Presley's most famous on-stage outfit was his embellished jumpsuit. It makes sense that granddaughter Riley Keough would turn to a similarly sleek one-piece for a statement-making moment at the 2014 Met Gala.

Will Smith gave his casual red carpet ensemble a sleek spin with a tan coat layered over a mocha brown turtleneck. Willow picked up on the tonal trend and achieved monochromatism with heather gray pieces.

Lesson: Put Together an Arm Party

Clearly, Nicole Richie got her knack for jewelry design from her dad Lionel Richie, who accessorized his on-stage outfit with arm party stacks on each wrist.

Nicole and Lionel Richie share an affinity for mega-wattage shine. He crooned on stage in 1983 in a sparkly silver blazer, while she refracted light in a gunmetal pleated dress for an appearance on Jimmy Kimmel Live earlier this year. 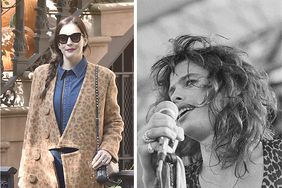 Celebrity Daughters Who Found Style Inspiration in Their Dads' Wardrobes 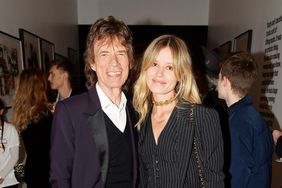 Georgia May Jagger Shares the Style Philosophy She Inherited from Her Rockstar Dad, Mick