Oof, wow ... this is heartbreaking.

Those who have watched the first episode of HBO Max's Sex and the City reboot, And Just Like That ... , know that within those first 45 minutes, we lose a beloved character. Yes, unfortunately the rumor is true: Big is dead — and thinking about the costumes from that unforgettable scene somehow makes us feel even worse.

That's because, as we see early on in the show, Carrie Bradshaw rewears her wedding shoes that very same day. She shows them to her husband prior to attending Charlotte's daughter Lily's concert, and has them on when she arrives home, where she finds Big on the floor. Who knew thinking about specific fashion could make us tear up and feel so emotional? Well, for starters, the show's costume designers, Molly Rogers and Danny Santiago, did.

"[The shoes] were supposed to lose their blue color and drain into the shower," Rogers tells InStyle over the phone, discussing those iconic Manolo Blahniks (which yes, many have even bought for their own weddings). "Big was supposed to notice them — which he does while he's smoking the cigar — and then they were supposed to fade into black. It's deep."

Plus, that's not all that's worth noting about Carrie's outfit from that scene. The blue flower on her blazer is also from the character's costume archive.

"That was from the original series, that blue flower," says Rogers, before revealing a twist to that sentimental story. "Our assistant costume designer had to go through hell and back to recreate six more of them the same color, because [Carrie] was going into the shower eventually. So we had to recreate six flowers in the same color, the same size, to go from wet to dry."

Of course, the first episode holds happier, more enviable fashion moments, too. For instance, pairing two bags together might become trend that finally takes off, thanks to Sarah Jessica Parker's own quirky choices.

"She was very interested in all of the Paco Rabanne bags during prep," Rogers tells us. "They were kind of a shiny neutral, so they were used quite frequently. But then she saw this little straw bag — that I tried to hide from her! — from a thrift store and it had a turtle clasp. She paired it with her Paco Rabanne for the first outfit out of the gate. I was like, 'Yikes!' But I ended up loving seeing the turtle. When we watched the episode, we would go, 'Turtle time.'"

Yes, They Filmed Fake Scenes for And Just Like That … to Throw Off Rumors

It's safe to say there will be plenty more iconic fashion moments from And Just Like That ... , and thankfully, Rogers and Santiago can't wait to give InStyle the inside scoop each week.

"I think there's an outfit that Carrie has been photographed in a lot with pink rubber gloves or yellow rubber gloves," hints Rogers. "That caused a sensation. People were mad at us because they thought we were dressing her horrible. You'll have to see what that story is so we can talk about it with you." 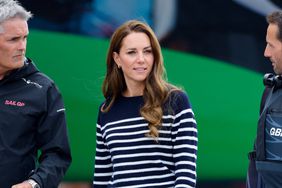 Kate Middleton Just Wore Her Go-To Comfy Sneakers Again, and They're on Sale for $40 at Amazon