You have to see Big Bird, Bert, Ernie and the gang, reimagined in some very 2019 looks.

Like most people reading this, I was not yet born when Sesame Street first flickered onto television sets in 1969. But thanks to endless syndication on public television, every child of the '70s through the '90s grew up with a version of the show that was largely unchanged. You only have to think of those opening chords, and the chorus of kids' voices singing "Sunny day, sweeping the clouds away," and you don't just hear it, you see it: kids of all colors, playing in fields and riding horses, or sitting on stoops and hanging off monkey bars with high-rise apartments in the background. You're on Sesame Street.

Sesame Street was a magical place where people lived alongside giant birds, their imaginary friends, and monsters, all brilliantly designed by Jim Henson. Amazingly, they all got along pretty well, too (aside from the occasional Oscar grouchiness).

There were other kinds of magic on Sesame Street, too: This was a place where adults took kids and their concerns seriously. Entire segments were devoted to adult characters like Luis, Maria, Gordon, Susan, and Bob helping kids (or their Muppet stand-ins) understand tough concepts — how phones work, how to cope when a friend hurts your feelings, the difference between reality and imagination.

In one now-legendary 1980s episode, the show even tackled the subject of death, by explaining to Big Bird why the friendly store owner Mr. Hooper wouldn't be on Sesame Street any more after the actor who played him passed away. You only have to watch that scene as an adult to understand that this was a show made with real integrity and the deepest respect for its audience, even if its audience couldn't yet tie their shoes. In an era when children were often expected to be seen and not heard, Sesame made a statement by proudly centering the emotional and educational needs of children. That's an idea we thankfully take for granted in 2019, but this show helped make it so.

Of course, when you're busy doing big-deal stuff like educating and empowering multiple generations of kids, you can be forgiven for ignoring the style side of the equation somewhat. Most of the Sesame characters we know and love have dressed pretty much the same since the '60s. That's why, as the show celebrates its 50th anniversary, InStyle partnered with some very big-deal designers to give these iconic characters a fresh new look they'll wear to their gala celebrations. Watch the video below as InStyle editor-in-chief Laura Brown helps the Muppets navigate a fashion emergency one half-century in the making.

As for the looks these lucky Muppets get to wear: Anna Sui gave Big Bird a dramatic "hippie caftan" — like those the designer showed at her Spring 2018 runway show. Like Big Bird, "the look was breezy, optimistic, romantic, nonconformist," Sui told InStyle. Opening Ceremony dressed Elmo in one of its classic track suits. Cookie Monster went futuristic courtesy of Rosie Assoulin's shiny azure jacket. For Abby Cadabby, Marc Jacobs made a custom dress straight off his Spring 2019 runway, with layers of filmy fabric and dramatic whorls of ruffles at the neck. And Isaac Mizrahi treated Bert and Ernie to a very au courant update: now, instead of '70s stripes, they're in bold pink varsity sweaters.

This project was a special one for Mizrahi, who told InStyle that Bert and Ernie's striped sweaters were "truly my favorite memory of Sesame fashion. I adore how, like the characters' relationship, the sweaters complement each other so well. Although I gave them a slightly more modern look, I kept the distinguishing features — Bert's white turtleneck and Ernie's yellow cuffs." For Sui, Count von Count wins Sesame Street's best-dressed: "I love his elegant Bela Lugosi black evening attire and cape with its extraordinary patterned lining! Very goth."

For some characters, this project represents the first time we've seen them change clothes in, well, ever. And they're changing right back for the show, where they'll continue to wear their old classics (or in the monsters' case, they'll continue to not wear clothes). It makes sense that a show so deeply centered on children's hearts and minds wouldn't focus on fashion all that much. In fact, this reporter found the origins of the show's iconic outfits surprisingly tough to tease out.

While we know Jim Henson designed the Sesame Muppet characters, we don't know if he also designed their outfits, and his early sketches for the characters who would become Bert and Ernie do not depict their clothing. As Sesame Street Creative Director Brown Johnson told InStyle, "The show is 50 years old, so some of the origin stories behind the characters' clothing are gone with the times, but Sesame has always tried to reflect current trends. Except Bert and Ernie's sweaters. You can't mess with those. They are stuck in the '70s, and they are brilliant."

And yet, there's something about the fashion on Sesame Street that's so much a part of its appeal — then as realism, and now as nostalgia.

Think of Bert and Ernie and it's true, those uber-'70s striped sweaters immediately spring to mind (naturally for characters rarely shown below the waist, the shirt is everything). Despite their similarity on first glance, the sweaters telegraph very different messages about the characters wearing them: Ernie, the uncomplicated, practical-joking extrovert, wears bold primary colors. Bert, who just wants to be left alone with his bottle-cap collection, layers a turtleneck underneath his drab green-and-orange stripes because, well, Bert is kind of a nerd. (We still love him, especially now that we understand the struggle of having an overzealous roommate.)

Critically for a show so steeped in realism, the adult characters dressed in ways immediately familiar to '80s and '90s kids raised by '70s parents. Think of Maria and Luis in their simple but stylish denim and plaid shirts; Susan and her snappy shift dresses and colorful turtlenecks. The entertainment world doesn't often offer up images of normal, everyday adults to kids — that was especially true in the glitzy '80s when I was watching, when many women on TV looked like Alexis Carrington on Dynasty. To me, an urban kid raised by a single, working-class mom, the adults on Sesame Street looked very much like the ones I knew in real life. It helped me see myself in those kids on the show, and, critically, that helped me feel like some of Maria's or Susan's sensitivity and love was directed at me.

Sesame's message of respect and empowerment resonated with Isaac Mizrahi, too, as he told InStyle. "It's meant so much to so many people over 50 years. They champion inclusivity and being yourself, which is the most important thing you can be taught as you're growing up in this world." Opening Ceremony's Humberto Leon loved the show for its ability to push the envelope in the right directions: "Sesame Street has always been ahead of the curve," he said. "My first memory was watching Buffy Sainte-Marie teaching Big Bird about breastfeeding. The show has an ethos that mirrors our thoughts on honesty and transparency."

Prairie Dawn was my personal Sesame style icon as a kid. She was a sometimes-flustered, but always enterprising 7-year-old who directed and performed piano in school pageants, and aspired to be a journalist when she grew up. Her baby-blue, Peter Pan-collar dress with matching headband, and sleek blonde bob were not just an outfit, but a look — one that spoke to the innocence of the character, while its not-a-hair-out-of-placeness hinted at her ambition. (It's entirely possible Prairie Dawn took the skills she learned on Sesame Street and is running a newsroom now.)

When I was three years old, I begged my favorite aunt to buy me a dress just like Prairie Dawn's, then I insisted on wearing it every single day to preschool with the force of will only a toddler can muster. Naturally I had the matching headband, too. This was my first "signature outfit," and one so distinctive my teachers started calling it the "Leeann Duggan look" — but really it was pure Sesame. I didn't remember until I was researching this story that Prairie Dawn had writerly ambitions, but I'm certain I internalized that. I didn't know any writers or journalists growing up, but I knew one on Sesame Street. Maybe, through my love of Prairie Dawn's personality and style, she helped expand my idea of what I could be.

By the '90s, the first generation of Sesame kids had grown up, and the show had evolved into a legitimate fashion reference point. Marc Jacobs and Prada had made high fashion out of Bert's grungy stripes, Anna Sui and musicians like Courtney Love had fully revived the babydoll dresses of Prairie Dawn, and every skater kid worth her salt was hunting thrift stores for what we literally called an "Ernie sweater."

As a fashion writer, I may have a different kind of sensitivity to the show's clothes than your average viewer. For most of us, the characters' fashion was only important in that it made them relatable and real, and pointed out their subtle differences. But as Creative Director Brown Johnson told us, the show's real and continued mission has always been to "help kids everywhere grow smarter, stronger, and kinder." The clothes we saw on Sesame Street, in their realism and relatability, helped us, the kids who grew up watching, enter that mission. We saw ourselves on Sesame Street, happy, loved, diverse, and real. And after 50 years, that's the still coolest thing about it.

Like the show itself, Sesame fashion is an inspiration we return to over and over again. We love that the gang got to step out of their play clothes and into custom designer ones, just this once — after all, it's not every day you celebrate a golden anniversary. And of course, we'll love them just as much when we see them back on Sesame Street in their time-tested outfits, just the way we remember them. 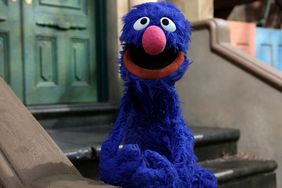 Why Does Grover From Sesame Street Have a Better Self-Care Routine Than I Do? 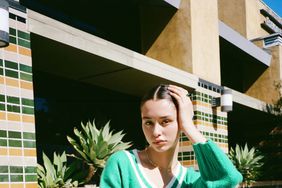