Shop brands like Ugg, Staud, and Dr. Martens starting at $4.

If you have exciting plans coming up this Labor Day weekend, you probably won't want to spend those days shopping online sales. That's why early Labor Day deals are the way to go, so you can take advantage of the many discounts available before the long weekend begins. And lucky for you, Amazon has already launched its Labor Day fashion sale a week ahead of the holiday.

The sale section includes incredible discounts on clothes, shoes, and accessories from popular brands, like Ugg, Theory, Dr. Martens, and Staud — just to name a few. Below, we rounded up 30 of the best early Labor Day fashion deals to shop at Amazon now.

Each clothing deal is better than the next, with savings available on everything from Ugg sweaters to a pair of Hudson Jeans to a Splendid dress. Prices start at just $8.

No fall wardrobe is complete without a few cozy sweatshirts, and this crewneck from Daily Ritual is the perfect addition — and it's on sale for $18. It's made from a blend of polyester, viscose, and elastane, and it comes in six color options. Plus, it has drop shoulders and flared cuffs, so it'll stand out from the other pullovers in your closet. One shopper said it's their "favorite shirt" because it's "soft, warm, and comfortable."

Another sweatshirt option, this Ugg cropped tie-dye hoodie is going for half-off. The cotton-blend top has rib-knit cuffs, a raw hemline, adjustable drawstrings around the hood, and velvet trim along the back of the neck and the hood opening. You can wear it now with a pair of shorts and sneakers, and continue using it as a layering piece in the fall with jeans or leggings and boots.

If you could use a new pair of jeans, look no further than these Hudson straight-leg denim pants, which are going for 60 percent off. They're a mid-rise style with a zipper fly, a straight-down silhouette, and ankle-length hems. According to a reviewer, the jeans are "very flattering," and "the denim retains its shape and doesn't stretch out too much."

Of course, there are also tons of can't-miss shoe deals, including discounted sneakers, mules, boots, and slippers, from brands like Ugg, Sam Edelman, Adidas, and more.

Slip-on sneakers make it easy to get out the door quickly, and these Steve Madden suede ones are a "very classy and very comfortable" option, as one shopper put it. The low-top shoes have removable padded insoles and a rubber platform with textured, anti-slip bottoms. You can wear them with everything from athleisure to business casual attire, making the sneakers an extremely versatile purchase.

For a more casual sneaker look, go with the Adidas Ultraboost 22 Running Shoes, which are going for 50 percent off. They're made with the brand's signature insole padding that feels like you're "walking on a cloud," according to a shopper. The sneakers come in 37 colors, and the upper part is made with at least 50 percent ocean plastic, so you can feel good about the environmental impact of your purchase.

With boot season around the corner, now is a great time to grab these classic Dr. Martens combat boots for 31 percent off. They're made from 100 percent leather with a lace-up closure, a pull-tab on the back, the brand's signature yellow stitching around the base, and rubber lug-soles. Wear them with jeans and a sweater — or even a flowy midi dress to give a little edge to your look.

Finish off your Amazon Labor Day shopping spree with accessories. Hats, scarves, jewelry, and handbags are all on sale, starting at just $4.

If you could use a new beanie, allow us to suggest this Carhartt knit one for $15. The acrylic hat comes in three colors — black, light blue, and neon yellow — each with the brand's logo patch sewn on the front. It'll be a cute and practical finishing touch to your casual outfits this fall and winter.

This next deal is almost too good to be true, but you can, in fact, get a Staud leather purse for 60 percent off. The Bean Convertible Bag is essentially three handbags in one, as it can be worn as a shoulder bag, a wristlet, or a clutch. It has a ruched design with a zipper closure and an interior pocket. It's the perfect small bag to have in your closet for evenings out.

Finishing off with jewelry, the Maison Irem Lucca Necklace is right on trend for fall and happens to be on sale for 50 percent off. It has 18k-gold plating with a secure lobster clasp, so you don't have to worry about it falling off. Given its simple design, the chain necklace would look great with both casual outfits and more formal looks. 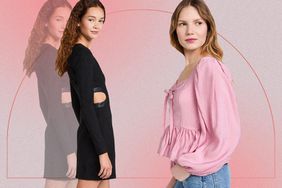 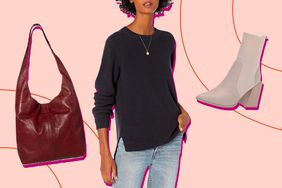 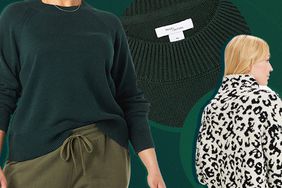 I Tested 25 Fall Sweaters From Amazon, and These Under-$60 Styles Are My Favorites 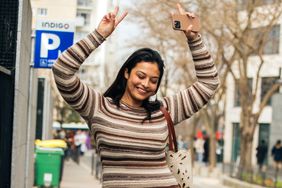 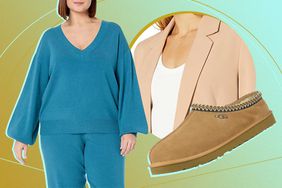