Reactions to Hedi Slimane’s début collection for Celine last September fell decidedly into two camps: Those who were already fans of his super-skinny cuts at Saint Laurent were ecstatic, and those who loved Phoebe Philo-era Celine, defined by her slouchy chic aesthetic, were outraged. Many women in the latter group said they felt betrayed by the brand, which they once trusted for smart, professional-looking clothes. Now it’s serving them miniskirts and biker jackets instead.

While a revolt was to be expected (did anyone really think Slimane was going to design a chunky turtleneck?), the very personal responses that ensued do raise an interesting, and much bigger, question for fashion. That is, just who’s out there designing for strong, badass women today?

Well, the short answer, judging by the spring runway shows, is a lot of designers, including some who happen to be strong, badass women themselves. Sarah Burton at Alexander McQueen, Maria Grazia Chiuri at Dior, and Clare Waight Keller at Givenchy are three who are bringing modern, feminine (in some cases, feminist) perspectives to houses that were founded by men. And each of them focuses on clothes that project power as well as beauty. A similar attitude can be seen in the dazzlingly smart collections of Victoria Beckham, Gabriela Hearst, and Roksanda Ilinčić, who are building potent brands in their own molds as fashion power brokers — Beckham, especially so.

“I wouldn’t offer something to my customer that I wouldn’t wear myself,” Beckham says, pointing out that her spring lineup was conceived with the notion of building an essential wardrobe with pieces that work for an important business meeting or for being at home with the kids. “It’s not easy to define a modern working woman these days, as we come in so many forms,” she says. “I think of her as driven, focused, and working hard to manage all aspects of her life, including making time for her family and friends.”

As with pretty much everything else in society these days, fashion tastes have become quite divisive and polarizing. On one side are designers who present overtly sexualized styles and receding hemlines (at Saint Laurent, Jacquemus, and the new Celine) as weapons of empowerment. On the other side are designers who make a persuasive case that clothing can be a form of armor, and with the global conversation happening right now over sexual harassment and unequal treatment of women in the workplace, do we really need to be stirring the pot?

“Fashion should be a reaction of our times,” says Maria Cornejo, one of New York’s most respected independent designers, who recently celebrated 20 years in business, a feat she can attribute only to the fact that she has always made clothes with the intention of making women feel good about themselves.

“As a woman, I know insecurities,” she says. “Wearing the wrong thing can set you off. I’m not expecting women to look like 15-year-old models or forcing them to be a muse.”

Give Cornejo a jumpsuit (her current favorite is an olive green wrap style with ankle straps) and she’s ready for battle. Versatility and function are practical considerations for women today, especially since they have started to out number men in the workforce over the past decade, and that demographic shift is beginning to be felt on the runways.

“The modern working woman is multifaceted and lives on her own terms,” says Rosetta Getty, who, as a mother of three girls, says she looks to women who have a strong sense of self as inspirations, like Georgia O’Keeffe, Christy Turlington Burns, and Rowan Blanchard.

“I start by thinking about my lifestyle and how I want to feel in clothes,” Getty says. “I always think about how to be comfortable and also elegant.”

Of course, many enlightened men, like Jonathan Anderson at Loewe or Pierpaolo Piccioli at Valentino, are out there designing clothes for strong women, and it’s interesting to hear their perspective too. Narciso Rodriguez, for one, says that rules for how to dress to be taken seriously no longer apply.

“Women still want to have fun with fashion,” Rodriguez says. “So it’s important to design clothing that is accessible and easy to wear and also to make singular pieces that women will covet — beautifully crafted, well-cut items that make a woman feel special. If a woman feels good and looks good, it gives her a power that’s subliminal.”

Other times, though, women want to project a power that’s overt, as when Chiuri makes feminism a proud component of her brand messaging at Dior. Her fabulous spring collection was broadly inspired by dance, but it was telling that she paid specific tribute in her program notes only to female artists — Loïe Fuller, Isadora Duncan, Ruth St. Denis, Martha Graham, and Pina Bausch. In a similar homage, Cornejo created a print for spring that features the faces of more than two dozen women she admires, including Jane Goodall, Gloria Steinem, Golda Meir, Ruth Bader Ginsburg, Coretta Scott King, and Marie Curie.

Whoever thought Marie Curie would be a fashion statement?

“We do fan T-shirts for bands,” Cornejo says. “So why don’t we do them for women?” 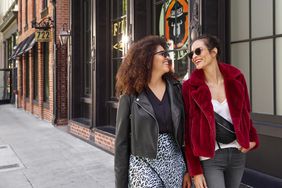