At New York Fashion Week, the stars flock to Lincoln Center to see and be seen-with an emphasis on the seeing when it comes to the clothes coming down the runway! Front row regulars like Nina Dobrev and Ashley Greene take in the collections from some of the best seats in the house, so when we asked these stylish six to reveal their wish lists, the picks were positively dreamy!

Monique Lhuillier stole the heart of the The Vampire Diaries star with her scarlet show-stopper. "I obviously love the red gown," Nina Dobrev told InStyle.com. "I'm so excited to see who's going to wear it. I'm sure it will be at the Oscars this year." We hope so too!

"The puffy coat with the belts (right), I'm obsessed! It was a great idea... it gives you a waist and makes you look feminine." Ashley Greene observed at the DKNY show. In addition to the label's waist-cinchers another accessory wowed the Twilight star: "I also loved the platform booties that were paired with the floral print pantsuit. Definitely going to steal those for something."

At the Kate Spade New York presentation, Brad Goreski threw us a curve ball: "Mine would probably be the feathered skirt with the 'Pardon my French' T-shirt and cute little bow belt," the vibrant dresser told us of his colorless, Parisian chic pick. What should the cheeky ensemble be paired with? "Black and white polka-dot nails, of course!"

"I was about to take a picture of that beautiful green and black dress over there," The Smash star told us of Rachel Roy's cinched design. Also on her radar: "I'm obsessed with her clutches—they're so cool."

There was no shortage of drama on the Jenny Packham catwalk, much to the delight of this glamorous star: "There were a lot of things I loved! The slinky '30s-inspired gowns moved so beautifully as they came down the runway. I could see myself wearing any of them for an evening affair."

Her body's to die for, but this star was ready to bundle up at Cynthia Rowley. "I really loved all that slouchiness. The lines are really beautiful," Rebecca Romijn revealed. "I want to get my hands on those masculine coats. I'm all over it!" 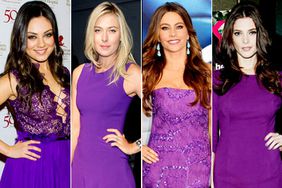 Rainbow Brights on the Red Carpet