One brand, one model, and a major missed opportunity.

Although it receives far less attention than other fashion weeks globally, New York Fashion Week: Men’s presents both emerging and existing designers with the opportunity to push the boundaries of menswear — especially when it comes to size representation. While womenswear has made (some) progress in this regard, menswear seems to have fallen flat.

At NYFWM: Fall/Winter 2020 — which ran from Feb. 3-5 — only one plus-size male model walked a runway. Of the 24 brands and designers listed on the official CFDA calendar — including more well-known names like Todd Snyder and Timo Weiland — just one chose to push the boundaries when it comes to size inclusivity: APOTTS. One brand, one model, and a major missed opportunity.

“My use of plus models is a celebration of their beauty, not pandering to their pockets and definitely not because of some trend,” says APOTTS designer Aaron Potts on why he chose to include a big and tall man in his presentation, which took place during the New York Men’s Day event on Monday. “I wanted to show that big guys love fashion, look good in it, and can absolutely rock it.”

The "big guy" Potts recruited is Austin Sparkman, a model from Ohio who took a break from the industry until recently booking a shoot with luxury menswear brand Gray Finn. It was then that Potts discovered Sparkman and asked him to appear in his fashion week presentation.

“I am so happy for the progress that’s been made in the fashion industry, particularly with body diversity for women,” Sparkman tells InStyle. “I would just like to see this happen for men as well. Big and tall/plus for men is such an untapped market. And since the majority of men are larger, they deserve representation.”

Sparkman is right: According to the CDC, the average American male has a 40-inch waist, which often equates to a size 2XL. Yet a majority of brands stop their offering at a size 38 (or XL), not even reaching the average size before capping out.

“Curvy women have fought for their place in fashion," he adds. "Men with more to love normally won’t say it, but I know they want to see themselves in media, advertisements, and fashion, too. And they deserve it. And it’s okay to want to deserve it.”

Because NYFWM is smaller than its women-centric counterpart, and therefore has a smaller impact on the industry at large, it often slips under the radar, and isn’t held accountable for the lack of body diversity each season. Finding size inclusivity in men’s fashion coverage is like finding Anna Wintour without her sunglasses on: an incredibly rare — yet blessed — sight.

The last time plus men made a grand appearance at New York Fashion Week: Men's was in July 2018 — two years ago — when ASOS cast Trey Campbell in its presentation. The decision seemed like a no-brainer considering the online brand is one of very few that have dedicated big and tall departments.

Designers presenting at NYFWM cannot claim that there’s a lack of plus models available: IMG Models created their Brawny division in 2016, and agencies like Wilhelmina and Bridge Models followed suit. Many of their models have since nabbed campaigns for brands like Target, Bonobos, and more.

Of course, the logistics are not that simple. Most designers at NYFWM are smaller up-and-comers, and creating samples for larger sizes does require more money, attention, and time, especially for those who are unfamiliar with the process of designing for fat bodies. Yet, with nearly no representation for men of size on the runway, one could argue that tackling the plus market would garner press for a designer looking to make their mark in the industry.

As the demand for plus-size menswear becomes more apparent on social media — in addition to the rise in larger male models — NYFWM would be wise to follow in the footsteps of many leading womenswear designers — from Tanya Taylor to Christian Siriano to Chromat and more — who’ve found the power of having plus bodies on the runway.

Size representation matters for a reason. It’s time the men catch on. 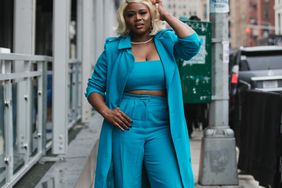