It's time to celebrate and get 'Happy,' y'all! Pharrell Williams, who turns 41 today, has had quite the year. The Grammy winner, who most recently signed on as judge for season 7 of The Voice, caught our attention in both style and beauty. On top of his already lengthy designer resume (he has his own fashion label Billionaire Boys Club), Williams nabbed a collaboration with Adidas this year, and is teaming up with Comme Des Garcons to create a unisex fragrance, aptly named GIRL, after his hit album.

But if we were to narrow down his most influential plaudits, Williams made an even bigger splash with his handmade Vivienne Westwood felt toppers ($180, viviennewestwood.co.uk)—first making an appearance at the Grammys, and reappearing at four major events, including the Academy Awards. Click through the gallery to see the buzzed-about Mountain hat, in all five different shades.

Williams first wore his now legendary Vivienne Westwood hat in camel at the 2014 Grammy Awards, and nearly stole the show. He has now worn the original color more times than we can count.

Williams opted for the Westwood headwear in gray at the 2014 Academy Awards Nominees Luncheon and has worn it on multiple occasions since.

While performing during NBA All-Star Weekend, Williams wore the hat in red.

The singer-producer donned his green topper at the 2014 Kids' Choice Awards, and previously while shopping in Paris.

Williams wore the black version of the Westwood-designed hat sensation for his 2014 Academy Awards performance, and most recently at MOCA's 35th anniversary gala.

With his hat and outfit, Pharrell channeled the uniformed elevator attendant he portrayed in a Lagerfeld-directed Chanel film at the Métiers d'Art show.

At the Hidden Figures premiere during the 2016 Toronto International Film Festival, Pharrell donned a navy and white "PLANT" cap.

Williams walked the runway during at Chanel's Métiers d'Art show in Paris with a glorious "crown."

Pharrell embraced a Western influence and donned a black hat with a blue and black trim for his outfit at the Palm Springs International Film Festival Film. 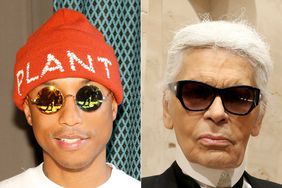 Pharrell Williams Goes to Chanel, Learns How to Be Karl Lagerfeld