Here's how to wear the timeless jewel in a way that feels fresh and fun.

Your calendar isn't wrong and, no, you haven't time traveled; the year is 2022, but by fashion standards, it could be the early aughts, the 1990s, or even the '80s. It's no secret that the trends of yesteryear are having a renaissance right now, with everything from claw clips to the dresses-over-pants combo making a comeback. But for the record, we're not exactly outfit repeaters. Instead, we've been reworking old favorites into our looks in a way that makes sense for our personal style. We've also replaced singular 'It' items with entire aesthetics, embracing things like cottagecore, fairycore, dark academia, and, most recently, pearlcore while getting dressed.

Closets of today are looking a lot less like wardrobes and more like mood boards, with an overarching theme that speaks to an individual's taste. And while 2020 and 2021 revolved around all things whimsical and escapist, according to Pinterest's annual trend report — a thorough analysis of search terms from its over 400 million monthly users — fashionistas are more than ready to dress up their everyday uniform. And, apparently, pearls have been appointed as the go-to accessory and embellishment.

Per its findings, Pinterest's report lists things such as "pearl gown" and "pearl ring" as trending search terms, but the iridescent gem is predicted to be more than just a pretty detail — it's going to be a closet staple. Fashion expert Deni Todorovič weighed in on the budding trend, insisting in Pinterest's report that pearls, though often associated with preppy aesthetics, will add "edge, texture" and a "gorgeous iridescent glow" to everything from street style to red carpet looks.

Of course, pearls have always been a focal point of fashion. The oceanic jewel has a rich history that, for a long time, was only associated with aristocrats and royalty.

"Women began wearing Chanel's signature, long sparkly pearl look alongside their real jewelry. In the '50s, they became much less expensive and were an everyday part of life," Sanders explains. "Toward the '70s and '80s, a single strand of pearls were seen as very preppy and classic, while they have recently shifted into more of a streetwear, casual, and even edgy look."

Today, Sanders says designers are creating pearls to appear more youthful, but they're also marketed towards a broader demographic. According to the Pinterest report, pearls are also expected to make a dent in menswear in 2022, as "pearl necklace man" also made the top search terms list for the category. This is likely a reflection of celebrity influence, Sanders tells us, with names like Harry Styles, A$AP Rocky, Shawn Mendes, and Pharell already wearing the accessory.

While Leah Nicole Langley-McClean of ElleNelle Bridal wears a pear stud almost every day, she tells InStyle that the size of the pearl she wears ultimately depends on her social calendar. Smaller pearls are for everyday wear and streetwear, she says, but as a general rule of thumb, "the more formal the event, the bigger the pearl." Noted.

Make It the Center of Your Statement

No matter your style, if you're looking to dip into the pearlcore trend, celebrity stylist Mickey Freeman stresses that the pearl piece you choose to wear should be centerpiece of the look. Think "an intricately embroidered pearl T-shirt, or a denim jacket with matching mother-of-pearl effect sunglasses," he advises.

Mix and Match With Your Favorite Accessories

Pearls are beautiful and make a statement all their own, but in an exclusive interview with InStyle, celebrity stylist Tiffany Briseno recommends pairing them with other accessories in your wardrobe gives them a street style feel. "I think the most refreshing way to wear pearls is out of their traditional landscape," she explains. "Try adding a string of pearls to your everyday gold or silver necklaces. [It's] a great conversation starter."

Emma Trask, celebrity stylist and owner of The Chrysalis Lab, tells us that her trick to styling pearls for everyday wear is to elevate casual looks (think loungewear or jeans and a tee) with a more classic pearl accessory, like a pearl necklace or stud earrings. The same rule applies for streetwear; it all comes down to contrast — i.e. layering pearls with other statement jewelry and mixing with harder fabrics such as leather or denim. To really make a statement, Trask says she loves combining traditional pearls, rhinestones, and fringe, as she did for Carrie Underwood's opening look for her Vegas residency.

Keep in mind that pearl accessories span beyond jewelry, so if you aren't one for necklaces or earrings, incorporate the gem into your wardrobe by way of other fashion categories, like handbags. "We see them appear as crossbody chains," says Jessica Richards, a trend forecaster, fashion consultant, and fashion director of the Accessories Council. For inspiration, she advises looking at "the fantastic wearable small leather goods from Chanel's spring 2022 collection, [which includes] pearl strap wallets on a chain and miniature purses" that were seen alongside pearl body chains, pearl cuffs, and pearl-embellished clothing.

Tia Mowry Debuts a Pearl-Embellished Side Braid on Instagram

Another way to rock pearls in 2022? The DIY way. According to Richards, "personalized" pearl statements have been popping up since fall 2021, spanning from decorated embellishments and letters, to pearl necklaces that include the playful addition of smiley face beads (similar to this option from Notte Jewelry). "Anything that takes this trend to the next level of modern but also feeling nostalgic and youthful," she says. 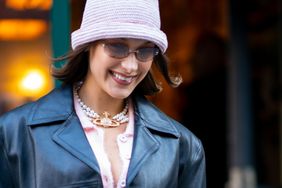 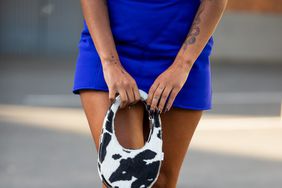