And now, pantsuits have reached maturity: Pantsuits are now for public apologies.

As any publicist will tell you, an outfit can tell an entire story the moment someone comes into view. And when Olivia Jade Giannulli, the 21-year-old daughter of actress Lori Loughlin and designer Mossimo Giannulli, took her seat at the titular Red Table of the Smith women's Red Table Talk, her silk fuchsia double-breasted pantsuit, which appears to be by lingerie brand Fleur du Mal, was practically screaming.

Olivia Jade, as she's known to her approximately 2 million YouTube subscribers, and her older sister Bella Giannulli were the rich kid punching bags du jour after their parents were arrested for allegedly fudging their daughters' applications to the University of Southern California with the help of Rick Singer, a conman masquerading as a college counselor. Lori and Mossimo were charged with conspiracy to commit mail fraud and honest-services mail fraud, as well as conspiracy to commit money laundering, and conspiracy to commit federal programs bribery. They pled guilty to the charges and are currently serving minimal sentences (2 months and 5 months, respectively) in federal prison.

The Giannulli family has had more than a year to consider their image, the public's response to it, and the impact that that reception has on their chances of dredging their careers up from the quicksand known as cancel culture. In April of 2019, when Lori arrived at a federal courthouse in Boston for the first time, she wore a camel-colored pantsuit accessorized with a calf-hair belt fastened neatly above her hips. At the time, the Aunt Becky quips were "everywhere you look," and Loughlin certainly appeared to be playing the part of the well-intentioned mother, "who, me?" written across her smiling face. Her palpably nervous energy seemed to tell onlookers, "this is all just a big misunderstanding!" When she was roundly criticized for treating her court date like a red carpet — smiling and waving to fans, telling reporters "I'm great" — Loughlin did a 180.

For her next court date, the 56-year-old swapped her booties for flats, her pantsuit for a stiff, knee-length shift dress and cardigan, and perhaps, most effectively, her celebrity smile for a somber grimace. She appeared to be taking a cue from Felicity Huffman, her B-list celebrity foil whose demeanor while appearing in court (and outside of it, for that matter), was as drab and dreary as the submissive black dresses and humble flats she wore.

It's with this understanding of the power of a pantsuit and the difference it can make in the perception of a public figure, that colors Olivia Jade's return to the spotlight.

"When all this first happened and it became public, I remember thinking ... 'How are people mad about this?' Like, I know that sounds so silly, but, in the bubble that I grew up in, I didn't know so much outside of it," Olivia Jade tells Jada Pinkett Smith, Adrienne Banfield-Norris, and Willow Smith. "And a lot of kids in that bubble, their parents were donating to schools ... It's not fair and it's not right, but it was happening. And so when this first came out, I was like, 'I don't really understand what's wrong with this.'"

Had she arrived at any public event with this mindset while wearing a silk fuschia pantsuit, the words "why are you mad?" primed on her plumped and glossy lips, the suit, like her mom's, would have been interpreted to wildly different affect. Like Lori, she may have been seen as unremorseful, and most damning of all, oblivious.

Jada's mother Adrienne expressed the strongest resentment at her guest's spot at the Red Table, her lips pursed together with visible restraint in the presence of, to quote Olivia Jade herself, "the poster child of white privilege."

"I'm exhausted," says Adrienne. "I'm exhausted with everything that we have to deal with as a community, and I just don't have the energy to put into the fact that you lost your endorsements. You know, or you're not in school right now because at the end of the day you're gonna be OK because your parents are gonna go in, and they're gonna do their sixty days, and they're gonna pay their fine, and you guys will go on and you'll be okay and you will live your life. And there's so many of us that it is not going to be that situation. It just makes it very difficult right now for me to care."

Lori Loughlin's Daughters Are Reportedly Struggling with Her Jail Sentence

Toward the end of the 30-minute conversation, the message I gathered from the presentation put forth by Lori and Mossimo's youngest daughter is that Olivia Jade knows that she is not the victim. OK, well maybe she kind of is, but not really. (She did not, she says, know that her admissions essays were changed before her applications were submitted. However, the photos she posed for that were allegedly photoshopped to look like she was a competitive rower were not discussed.) Olivia Jade is owning her mistakes, but still wants everyone to know that she really, truly, somehow, did not understand at the time that they were mistakes.

Her wardrobe choice was as careful a reflection of this sentiment as could be: a youthful, feminine shade of pink dressed up in the tailored uniform of a thousand "not here to mess around" women before her. The silk pantsuit said, "I'm not a girl, not yet a woman." Or perhaps, in fitting with her new narrative, "I was a girl, but I'm trying to be a woman now."

"I'm 21," she says pointedly. "I feel like I deserve a second chance to redeem myself, to show I've grown." Yes, brand deals were lost, but maybe they'd come again if companies are interested in this newly minted model of celebrity offspring, one who has been allowed to marinate in the shame of a nationwide scandal, and endured all the community service stunts and learning opportunities that inevitably follow.

The Olivia Jade redemption story is as much about finally being able to offer the apology she says that, for legal reasons, she was not able to offer more immediately to her fans, as it is about selling herself as a powerful player in the fashion and beauty worlds. Before the scandal, I wouldn't be able to tell you the difference between Olivia Jade and Addison Rae. I still don't know why I even know the name Addison Rae, but Olivia Jade, the humbled #bosslady in the pantsuit, will be the "rich to woke-but-still-rich" story archetype for the future. 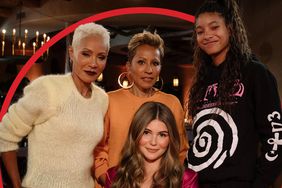