There have been many famous models over the years, but there has only been one Naomi Campbell. The supermodel defined a decade of fashion with her iconic walk, impeccable style, and enviable friendships. She also shattered barriers from the very beginning of her career.

In more recent years, she's been awarded prestigious honors, including the CFDA's 2018 Fashion Icon Award and the 2019 British Fashion Council's Icon Award. She also started an incredible YouTube channel that is a must-watch.

The icon to end all fashion icons turns 50 on May 22, so to celebrate, let's take a look back at all of the incredible runway moments that made her so unforgettable.

It was the '80s, it was over-the-top, and Naomi Campbell walking in an Yves Saint Laurent show was the epitome of glamour.

Sonia Rykiel's Paris shows were a defining part of Paris fashion in the late '80s. So was the supermodel on the runway.

As the supermodel squad rose in the '90s, so did the unforgettable Naomi Campbell moments on the Chanel runways.

20 years into her career, Naomi Campbell commanded the runway in a monogram face mask.

Campbell used her runway prowess for good through her Fashion for Relief. In 2010, her London show raised disaster relief for the people in Haiti.

Bodysuits, couture, and Naomi Campbell are the only things a fashion show has ever needed.

In 2020, Naomi Campbell made several runway appearances including this one at Tommy Hilfiger where she made a tracksuit look like a ballgown. 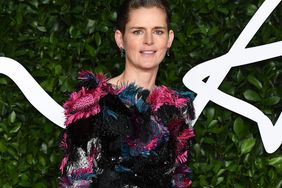