"If all the world’s a stage, then identity is nothing but a costume.”

It’s a line Marc Jacobs has used before, and it reflects a philosophy that has been at the core of his business for 24 years—that fashion enables expression of the constantly malleable self. Whether on the runway or off, Jacobs has always moved by instinct, changing looks from one season to the next.

When we meet at a photo shoot by director Hype Williams to celebrate Jacobs’s fall collection—an exposition on hip-hop style–his latest guise features a streak of rainbow-colored hair. This is Marc Jacobs on the unicorn trend. His mood on this occasion, however, seems a little less bright—at least until he is on set, dancing and singing with Biz Markie, Kurtis Blow, LL Cool J, and Salt-N-Pepa (all of whom inspired his designs in a roundabout way this season).

“It’s a very weird time,” Jacobs says. “I feel disconnected, like I don’t see anything in this day other than the Internet as being a thing. I feel out of touch with what today really looks like. But that’s the thing. You walk in here and see Hype and all this, and how happy people are, and it’s worth it.”

No one in American fashion is more closely scrutinized or criticized than Jacobs, which is a testament to his stature even at a moment when his business—like that of most designers and retailers—faces enormous challenges. But as much as the constant probing and pressures can be a distraction, he pushes harder rather than retreating.

At an LGBT benefit honoring Jacobs this spring, his friend Lana Wachowski, the director, described the designer as “a manic magpie gathering shiny, fun, weird, beautiful, sparkly bits from anywhere and everywhere.” Wachowski was so taken by his approach that she decided to borrow Jacobs’s motto (which itself owes a debt to William Shakespeare, of course) as the title of an episode of her boundary-blurring Netflix series, Sense8, this year and invited him to appear as a guest star.

In a now infamous example of his identity-sampling, Jacobs plucked one of his runway ideas right off Wachowski’s head, paying homage to her distinctive Raggedy Ann hairdo with madcap wigs styled as pastel dreadlocks in his spring 2017 runway show, which, to his surprise, drew charges of cultural appropriation. It certainly didn’t help that most of the models who wore them were white.

Jacobs might have believed he had demonstrated a positive embrace of one element of diversity—Wachowski came out as a transgender woman right before the 2012 première of Cloud Atlas—and yet the controversy-prone designer compounded the crime by becoming defensive and making a regrettable comparison to black women who straighten their hair. What was he thinking? Jacobs found himself in the doghouse for political incorrectness, at least for the season.

“What I learned from that whole thing, what caused me to pause after it died down a little bit, was that maybe I just don’t have the language for this, or maybe I’ve been insensitive because I operate so inside my little bubble of fashion,” Jacobs says.

His fall 2017 show, then, marked something of a comeback. Staged at New York City’s huge Park Avenue Armory, as is his custom, but with the barest of sets and no lighting or music, it was a reminder of just how great a showman Jacobs can be. Here was an array of streetwear that had been enlarged to exaggerated proportions, shown in such disconcerting silence that the clothes took on the formality of vestments. It also appeared to make amends for any hurt feelings left over from spring, beginning with the title, which was “Respect.” A program made clear his intentions and explained that his references to hip-hop style in the “well-studied dressing up of casual sportswear” were done in tribute to the impact of a movement he had witnessed during his youth as a student at N.Y.C.’s High School of Art and Design. His designs included tracksuits, a shearling-lined denim jacket, oversize bucket hats by Stephen Jones, and heavy gold neck chains made in collaboration with the artist Urs Fischer.

At the end of the show, the applause was nearly as loud as the music that greeted guests when they exited the armory. There, on the sidewalk, all the models were seated in front of enormous speakers, taking cell-phone photos of the departing editors, a role reversal that Jacobs devised after becoming frustrated that so many people at his shows seemed to be distracted by social media.

In total, the experience read like a deliberate rebuttal to his critics, but Jacobs insists that was not the case.

“We’re always working toward something, but we don’t really know what that is,” Jacobs says. “It takes shape based on all of the things that are of interest, that feel good, sound good, look good. It’s just through the process that everything becomes distilled into what seems to be a story.”

This one started with a gold Cartier Love bracelet. While on vacation in St. Barts last December, Jacobs suddenly thought wearing gold jewelry looked right, and he bought bracelets for his friends. “Usually, there’s something I’m enamored with, but I wasn’t particularly interested in clothes at that moment,” he says. “The idea of gold jewelry, in a weird way, became the only thing I was convinced that I did like.”

When he discussed this with the stylist Katie Grand, his longtime collaborator, she asked if he had seen Hip-Hop Evolution, a four-part documentary by Darby Wheeler that had just débuted on Netflix. “Watching it brought back that whole moment and how cool people looked, and I thought about people I knew back in those days—Debi Mazar and different people around New York—and how that style infiltrated their style in some way,” he says. While Jacobs detests nostalgia, his affection for his early years in the city—working retail at Charivari and creating his first collection of smiley sweaters at Parsons School of Design, even being fired from Perry Ellis after his disastrous grunge collection in 1992—remains a constant in his work in the form of slouchy sweaters and overdyed plaids.

“I was going to rock clubs, but I remember becoming aware of hip-hop and its influence on other music, of Blondie doing ‘Rapture,’ and the style of the way people looked,” he says. “It felt so casual, but it was such a specific, decisive choice, like all of a sudden there was this sharpness that came out of casual clothes.”

The starkly different reactions to Jacobs’s last two shows illustrate how the underlying paradox of fashion, which can create and enhance identity but also distort and potentially debase it, has been magnified in modern times. When Jacobs showed a collection for Louis Vuitton in 2009 that featured models wearing large Afros, it wasn’t a big deal. And this change, or rush to judgment, worries Jacobs.

“There seems to be this strange feeling that you can be whoever you want as long as it’s ‘yours,’ which seems very counter to the idea of cross-pollination, acceptance, and equality,” he says. “Now you can’t go to a music festival with feathers in your hair because it’s cultural appropriation.”

With their audiences more empowered to protest, Jacobs, Chanel, Gucci, Valentino, Dolce & Gabbana, and even the Kardashians and Jenners have faced charges of insensitive or downright offensive displays over the past two years. But the distinction between appropriation and appreciation in these cases isn’t really that hard to see. (Who in their right mind approved a T-shirt that superimposed an image of Kylie Jenner over Tupac Shakur?)

For Hype Williams, who was directing videos for Mary J. Blige and The Notorious B.I.G. before he first got to know Jacobs 15 years ago, it comes down to authenticity. Jacobs, he says, told him even then how much the hip-hop community had made an impact on the world of style. “He’s really from that era,” Williams says. “People who were legitimately born and raised in it know that Marc is a part of that culture. He’s always been influenced by it, and we know it too. That’s why everyone is so comfortable with his sensibility.”

For what it’s worth, no one who turned up for Jacobs and Williams expressed concerns. Says Todd Smith (LL Cool J), “There’s an argument to be made that we should all be free to express ourselves, but I think it’s good when you include artists who lifted the culture up. This is great, because instead of Marc just running with the culture, he’s grabbing some people who are official and a part of that, and I think he should be commended for it. Instead of appropriation, it’s a collaboration.”

And between takes at the shoot, there was Jacobs with his rainbow hair being pulled onto the set by Cheryl James and Sandra Denton, who formed Salt-N-Pepa while they were students in Queens, joining along word-for-word with a rendition of their 1986 hit “Push It.”

“You asked me what excites me today,” Jacobs says. “It’s this. I guess that’s the weird thing in the way that I am never aware of what it is that we’re actually feeling while working on a collection—but in retrospect, you see. The show worked, and it obviously struck a chord with people outside of our little design room who are feeling that too.” 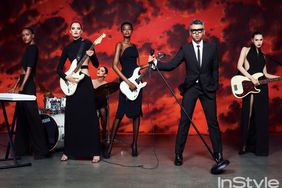 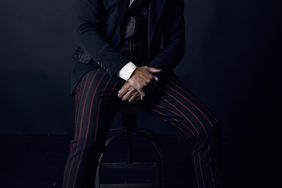