She has history with the brand, too.

Squid Games's breakout star HoYeon Jung can add one more achievement to her growing résume. Louis Vuitton named Jung its newest Maison Ambassador for fashion, watches, and jewelry. But it's not the superstar's first brush with Vuitton — WWD reports that she walked the runway for the storied brand's Spring-Summer 2017 show.

Though viewers from the U.S. may know her as an actor, the publication notes that in South Korea, she's a well-known model, even appearing on Korea's Next Top Model's fourth season. Her runway credits also include Opening Ceremony, Marc Jacobs, Fendi, Rag & Bone, Alberta Ferretti, and Max Mara. Off the catwalk, she's worked with Schiaparelli, Chanel, Miu Miu, Emilio Pucci, Prabal Gurung, and Lanvin.

"I immediately fell in love with Ho Yeon's great talent and fantastic personality, and I am looking forward to starting this new chapter of the journey we started at Louis Vuitton a few years ago," artistic director of women's collections Nicolas Ghesquière added. Louis Vuitton hasn't shared any news on when Jung will appear in campaigns, but a preview image shows her with the maison's classic Twist bag and graphic black-and-white slingbacks. She joins fellow ambassadors BTS and Naomi Osaka.

Squid Game is the first Korean drama to top Netflix's top 10 weekly most-watched TV show charts worldwide and even reached no. 1 in both the U.S. and U.K. WWD notes that it is set to be Netflix's most-watched series to date. 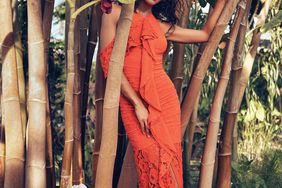