OK, so we all recognize the opening lines of Charlie’s Angels — or at least those of the savvy 2000 cinematic adaptation that recast the crime-fighting trio of hot babes from the 1970s TV series into a power brand with considerably more feminist appeal, especially for a younger generation more familiar with Alex, Dylan, and Natalie from the movies than with Jill, Kelly, and Sabrina from television. “They had a real sisterhood between them, and at the same time they were kicking ass,” says Laura Harrier, explaining the Angels’ enduring allure as well as the inspiration for this InStyle shoot, which brings the actress together with her friends in real life, Chloë Grace Moretz and Sophie Turner. “And the Destiny’s Child song from the first movie was epic,” adds Harrier.

“The relationship between those three girls was the strongest thing about them,” says Turner, who first met Harrier at a Vuitton fashion show and Moretz at a Met Gala after-party. As ambassadors for Vuitton, the three women have formed bonds of their own, with an easygoing camaraderie that has not gone unnoticed by the house’s artistic director, Nicolas Ghesquière. Reflecting on the zeitgeist of today’s newly awakened Hollywood, the designer says they represent exactly the types of fierce, outspoken individuals who inspire him. (He appears here as their elusive Charlie.)

VIDEO: Behind the Scenes of Louis Vuitton’s 2018 Charlie’s Angels

“I’m lucky because I get to watch two sides of them — the side where they portray different characters, like a romantic heroine and then a serial killer, and at the same time I get to know them in real life,” Ghesquière says. “I love the fact that these young women are not afraid to cross boundaries and express themselves in many ways.”

For such a prominent designer who has long been revered as an innovator — at Balenciaga for 15 years and now at Vuitton for five — Ghesquière has always allowed an element of popular culture to enliven his work, sometimes making abstract references to his love of music and sports and other times nodding more obviously to science fiction.

And while he is not primarily a designer for the red carpet, he is very much attuned to that world and fascinated by its characters. He asked to meet Harrier just before she appeared in Spider-Man: Homecoming and came to know Turner, of course, through her role as the not-to-be-underestimated Sansa Stark on Game of Thrones. Ghesquière has known of Moretz the longest, ever since her performance as a potty-mouthed preteen vigilante in Kick-Ass. Speaking on the phone a few days before the Venice première of Luca Guadagnino’s Suspiria, one of three films she has out this fall, Moretz described how Ghesquière custom-made a poetic, floor-length floral silk gown for her to create a specific impression.

“He wanted to see me, in his words, in a more romantic light that could lend itself to the landscape of Venice, and to offset the movie, which is this really dark, twisted horror film,” she says. “It feels like a special little moment.”

This is also, it should be noted, a special big moment for Ghesquière, whose most recent collections have more deeply reflected his vision for Vuitton by bringing together many facets of individual style. It is an amalgam not only of time periods and places but of the many women who have inspired him during his career, such as the stylist Marie-Amélie Sauvé, his former colleague Natacha Ramsay-Levi (now the creative director of Chloé), and the iconic creative director Grace Coddington. “They are women with great points of view, and they made our world evolve, in a way,” he says.

In other big news last May, only a week before he was to show his cruise collection in the South of France, Ghesquière announced he was renewing his contract at Vuitton, putting to rest industry gossip that suggested a break was coming. This turned out to be speculation based largely on a recent pattern of designers whose tenures at other houses were short-lived, as well as on the obvious potential for internal tension after Vuitton named its new menswear designer, buzz magnet Virgil Abloh, in March. But that was all talk.

“We set up the new situation in great serenity, and I have to say that is not very usual for this business,” Ghesquière says. “There is always the game of who is going to threaten the other. Are you staying or going? Do we want to keep him? This is why we decided together to make an announcement, because we wanted to give a great message of good things. When things are going well, there is no reason to act differently.”

Yet there was no missing the sense of celebration at the show, which was held at the Fondation Maeght in Saint- Paul-de-Vence amid a stunning outdoor installation of enormous abstract sculptures, collectively known as Labyrinth, created for the art patron Aimé Maeght by Joan Miró beginning in the 1960s. As one of the earliest examples in France of turning a private collection into a public space, with important connections to nature and collaboration, the setting also ordered a parallel to the fashion titans creating their own architecturally marvelous museums today, including one by Ghesquière’s own boss, Bernard Arnault.

“It was the last element I needed to really make a point with this collection that, to be honest, was only half done until then,” Ghesquière says. “I started to see all the things that already existed in my memories about that place.” The collection, worn by Harrier, Moretz, and Turner in the images here, was one of the best received of Ghesquière’s career. Influenced in part by the idiosyncratic style of great art families like the Maeghts, Ghesquière’s designs were remarkably free of convention or restraint — collages of wrapped white silk, a pink satin negligé worn as a short dress, an oversize jacket that looked as if it had been made of dusty gray rags, black leather boots that started at the thigh and ended with exaggerated sneaker soles.

Looking at his designs, it is tempting to imagine who he had in mind for each piece. That great gray jacket went to Cate Blanchett, who wore it shortly after, to the London première of Ocean’s 8. Harrier chose a pink dress for the New York première of BlacKkKlansman. Moretz’s dress for Venice was based on one that appeared first in short baby-doll proportions with an offset, Picassoesque collar. But the intention, Ghesquière explains, is always a spontaneous expression of what he feels is right for the moment.

“I leave room for different types of women to project themselves into these looks,” he says. “I integrate the fact they will sometimes have second or third lives, but first of all, I think about a pure design. I might not always be right in the stories I describe, but there is a response, always.”

More often than not, Ghesquière is spot-on. And his growing confidence is apparent not only in his clothes but in how he lives his life. Anyone who follows him on Instagram will be familiar with his coterie of friends and their marvelous vacations on yachts and private jets, with appearances by old acquaintances and past employees who have gone on to become competitors. They all remain close at hand. Fans will also recognize that the designer has welcomed an element of chaos into his life, now raising two black Labradors named Léon (21 months) and Achille (8 months). They are “very turbulent,” he says, but letting go has been good for him, if not necessarily for his shoes.

“I’m quite a control freak, for sure,” he says. “Taking an unexpected decision is helping me, and it has probably softened my personality. When I was younger, I was quite stubborn and didn’t let go of things. It was not a mistake, but let’s say it was sometimes a little too much for me and the people around me. With the years, what is good is to learn how much you can let go and still be very accomplished.”

Asked how he feels about his place in the dramatically shifting landscape of fashion today, he says he is, in fact, excited by it.

“I never forget that what is most important is to have a point of view and a voice,” he says. “If you lose that or become blasé or disturbed by change or take things as a threat, then it’s over.”

This brings us back to the mission at hand. In Harrier, Moretz, and Turner, Ghesquière sees women with a similar inner strength that calls to him as a designer, which is why he invited them to represent Vuitton.

“I always look up to women as being heroines, in a way,” he says. “What I hope is that when any woman wears these clothes, she will see them as an extension of her own personality.”

Putting that to the test, each actress was asked in separate interviews how she feels when wearing his clothes:

“They make me feel strong and powerful and intelligent,” Harrier says. “He’s not just dressing a woman for a man.” 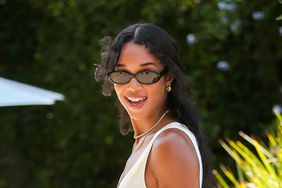 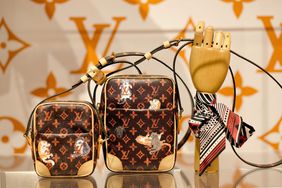