Among the abundant pleasures of Greta Gerwig’s Little Women, released in theaters on Christmas Day, are its irresistible visual aesthetics. As we follow the March sisters making their way in the world, and flash back to formative scenes from their childhood, the film’s vivid colors and textures envelop the audience like an exquisitely crafted weighted blanket. It’s the cinematic equivalent of hygge.

If the movie’s tableaus and compositions often remind you of a painting Amy may be studying in Paris, you’re definitely on to something. Costume designer Jacqueline Durran drew inspiration for her designs from art and artists of the 1860s, when Little Women is set. “I wanted to start by getting an idea of the period and what people wore, particularly artistic people living a radical life, or people who looked a bit different than the way we imagine Victorians to look,” Durran tells InStyle.

Everyone Agrees That Female Directors Have Been Snubbed By the Globes — So What Now?

The March sisters — Jo, Meg, Amy, and even poor Beth — represent a generation of women coming of age with a more modern consciousness than those who preceded them. “Clothes are part of the girls’ journey into the world, part of their creation of themselves as characters,” says Durran, an Oscar-winner and four-time nominee. Using mid-19th century master painters as touchstones, Durran tailored each sister’s look to the character’s idea of who she is becoming, as written by Louisa May Alcott in 1868, and imagined for the screen by Gerwig. Durran spoke to InStyle about the artistic inspirations that went into her designs and what they say about the women who wear them.

A stand-in for Alcott herself, Jo is a writer committed to her craft and living on her own terms. Unlike her sisters Amy or Meg, she has little interest in romance or fashion. “When she’s a child, Jo slightly hates clothes because she doesn't want to be a girl,” Durran says. The designer looked to Winslow Homer, a preeminent American painter whose work directly overlaps with the period and setting of Alcott’s novel. “The paintings have a real life to them,” she says. They show people walking and playing in the countryside as Jo often does, rather than shut up inside stuffy interiors. After selling her hair, Jo wears a hat that Durran lifted directly from a Homer painting of a little boy standing in a field.

In scenes that find Jo pursuing a career in New York, “The idea was that she was trying to dress up a bit, like when you first start work and think you need to look more proper,” Durran says. “There was definitely a feeling that she dresses to conform more to what society would want, but at the same time, she can't give up the boyish quality to her clothes.” Another hat Jo wears to her publisher’s office, once she’s completed the book that will become Little Women, reflects her efforts to lay claim to a professional realm conventionally crowded with men. “The hat she chooses to wear is a woman's version of a man’s hat,” Durran says. “She's appropriated [the look of the men in the office], taking the space that she felt she didn’t own at the beginning of the movie.”

Homer also served as a point of reference for Beth’s look as well, “to do with how based in the home and natural I wanted Beth’s clothes to be,” Durran says.

One of the most satisfying triumphs of Gerwig’s adaptation is the redemption of Amy, a character the film considers as carefully and attentively as Jo. Though she previously may have been thought a villain, as written by Gerwig and embodied by Pugh, Amy is circumspect about her prospects as a beautiful woman, an attitude reflected in her clothes. “Of the children's wardrobe, hers is by far the fanciest and most conventional. Her Parisian wardrobe, or how she evolves, follows that theme,” Durran says. With the means provided to her by Aunt March, Amy has an opportunity to explore the appreciation for fashion she’s had since childhood. “Given her speech about women's position in the world, I think that makes sense as part of her character,” Durran says. “That is what you do — you dress up, look as beautiful as you can, and you have a rich husband.”

Durran drew inspiration for Amy’s wardrobe from the French Impressionists she travels to Paris to study. For example, the white dress with delicate black accents that Amy wears during Laurie’s proposal was inspired by many such garments Durran saw in the work of artists like Claude Monet and Edouard Manet. Durran notes that the spirit of Impressionism also suffuses the beachside scene when Amy first meets Fred Vaughn (Dash Barber), whose proposal she eventually turns down.

From the wildflower crown Meg wears on her wedding day to the earthy tones in which she is often dressed, Durran drew on the distinctive aesthetic of artists known as the Pre-Raphaelites to shape Meg’s look throughout the film. Paintings by artists like Sir John Everett Millais and Dante Gabriel Rossetti, who were working at the same time as the Impressionists, emphasize a kind of ethereal realism and intimate connection with the natural world. “I felt that Meg had a romanticism that you see in the Pre-Raphaelites, in the kind of yearning for the past and Medieval romantic love,” Durran says.

In Gerwig’s adaptation, the March matriarch feels much closer in character to her daughters than to Streep’s Aunt March, her husband’s sister and technically a peer. “Laura [Dern] felt that there was more continuity in how Marmee looked between her and her daughters than you previously may have thought,” Durran says. “Historically, Louisa May-Alcott’s mother had been a well-known radical and feminist and part of a creative community, and so Laura really didn't want to represent Marmee as the conventional Victorian mother.” Mom and daughters alike wear criss-crossed shawls, and Marmee’s Christmas dress, in a deep red that becomes associated with her character, is made from repurposed materials. “Definitely we wanted to have that sense of reusing things,” Durran says, as the family is of modest means and the sisters are so often seen making things and rarely have idle hands.

As a formidable figure of the old guard, Aunt March is often positioned in contrast to the March sisters’ more modern ways, both in attitude and dress. “The more we could have that Victorian conventional world represented, it made the radicalness or nonconformity [of the March sisters] more apparent,” Durran says. One particular painting, by British portrait painter Cyrus Johnson, served as special inspiration for Aunt March, both in the formal style of dress and an ineffable quality true of so many of Streep’s characters. “She's turning in the painting and there’s a sparkle of intelligence in her face,” Durran says. “You could believe that this woman would be like Aunt March.” 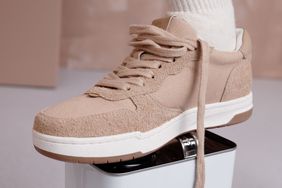