On November 20, 1947, two years after the end of the second World War, the world reveled in the marriage of a reserved, 21-year-old princess to the man she fell in love with at the age of 13. And now, 67 years later, we're reveling in the still-strong marriage of the pair, now known as Queen Elizabeth and Prince Philip, the Duke of Edinburgh.

Just a few short years ago, the world rallied around another royal wedding, that of Prince William and Kate Middleton, on April 29, 2011. Despite the 64-year gap between the two events, there are many similarities between the two couples, which we've rounded up in this slideshow.

Still, as fun as it all is to look at, the parallel we truly hope to see is that Kate and William have just as strong and lasting of a union as the young queen and her prince. All hail to love!

PHOTOS: Kate and the Queen: How Their Moments Match Up!

On November 20, 1947, the then-princess Elizabeth and Prince Philip, the Duke of Edinburgh, wave to the crowd from the balcony of Buckingham Palace following their wedding. Nearly 64 years later on April 29, 2011, Queen Elizabeth's grandson William does the same with his new wife, Kate Middleton.

Stopping to Smell the Poppies

The Queen and Prince Philip visited the Blood Swept Lands and Seas of Red evolving art installation at the Tower of London on October 16, 2014. Three months earlier, Prince William and Kate did the same.

A few days after The Queen and her prince grimaced during a hockey match between England and Wales, the young prince and his princess did the same when Wales took on Scotland. (Wales lost both games.)

William and Kate, the Duke and Duchess of Cambridge, take in some entertainment during a tour of Tuvalu, an island nation Queen Elizabeth and Prince Philip visited decades earlier.

In April 2014, William and Kate sample red wine in Queenstown, New Zealand, while the Duke of Edinburgh and Queen Elizabeth toast the new millennium on December 31, 1999 in London.

The Queen and Duke attend the races in June 1957. Fifty-five years later, Prince William and Kate strike a similar pose for the grand finale of Queen Elizabeth's Diamond Jubilee.

The Queen celebrates her 76th birthday in a navy topper with a yellow bouquet in April 2002, while the Duchess dons a similar look after a December 2012 visit to London's King Edward VII Hospital.

The Queen and the Duke of Edinburgh hold their newborn daughter, Princess Anne, during her christening on Oct. 21, 1950. On October 23, 2013, William and Kate arrive for son Prince George's christening. 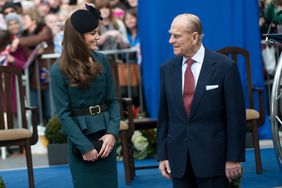 Kate Middleton and Prince Philip Are Alike in One Particular Way