She has style! She has flair!

If Jordyn Woods wanted to lie low for a bit following her fallout with the Kardashian-Jenners, we honestly wouldn’t have blamed her (especially as those drama-filled episodes begin to air). However, it seems the model-slash-designer-slash-businesswoman is doing just fine without the famous family, not only heading to restaurants and doing press, but also wearing a variety of cute outfits while doing so.

VIDEO: Jordyn Woods Has Been Dressing Like This Iconic ‘90s TV Character

Over the past few days, Jordyn’s style has been particularly noteworthy, featuring a variety of matching sets and curve-hugging dresses. But when the Instagram account @whatfranwore drew comparisons between Jordyn and The Nanny’s Fran Fine (played by Fran Drescher), it finally clicked. Jordyn has consistently been channeling this iconic ‘90s TV character, and we more than approve of this brilliant fashion decision.

12 of Cher’s Clueless Outfits That Are Still on Trend

Fran was known for her quirky styling and “more is more” mentality (thanks to talented costume designer Brenda Cooper), and, considering that ‘90s-inspired looks are still going strong, it’s the perfect time to turn to The Nanny for inspiration. While we can't confirm that Jordyn is doing this intentionally, with a bit of research, we were able to find other eerily similar ensembles. Like it or not, the girl is totally channeling Ms. Fine — and we're kind of bummed we didn't think of it first.

Take a look at Jordyn's The Nanny style, ahead, and keep your fingers crossed that these recreations keep on coming.

Ahh, the photo that sparked it all! @whatfranwore was the first to compare Jordyn 's playful top layer to something Fran wore — and we totally see it. We loved this furry trend way back when, and we're still fans today.

Despite what the calendar says, winter weather seems to be sticking around in certain places, and Jordyn is clearly making the most of the cooler days with this fur-trimmed coat. Fran Fine owned something similar.

Yes, Jordyn's version was a dress while Ms. Fine's was a top, but the fact that they're both lounging around in these photos has us doing a double-take.

It's called a classic for a reason! Although Jordyn went for a low-cut option and Fran styled hers with a statement belt, this is picture proof that a great black dress is well worth the investment. It's timeless.

Why go with something dark and boring when metallics work as neutrals, too? We like how Jordyn and Fran think!

Every so often, this picture pops up on social media, and serves as a source of inspiration for our own ensemble. Considering Jordyn also stuck to a single color when putting together this outfit, it's possible that she (or her stylist) saw it, too.

It's a bit of a stretch, but Fran wore a variety of chic robes throughout the series, and it seems that Jordyn has a stylish one of her own.

This isn't your average black suit! Both Fran's and Jordyn's are velvet and include an itty-bitty miniskirt instead of pants. Jordyn, however, chose to show a little more skin by skipping a layer under her jacket.

They both made sure to pair their white co-ords with white shoes, but instead of a Mr. Sheffield dressed in black, Jordyn went with a leather jacket.

It isn't easy to pull off a full leather look without going into wannabe-superhero territory, but since they kept their accessories fairly simple, both ladies look pretty badass. We could even see Jordyn trading in her black option for Fran's fun, orange version.

Nothing says va-va-voom like a curve-hugging leopard dress with a sweetheart neckline. Perfect for a night on the town. 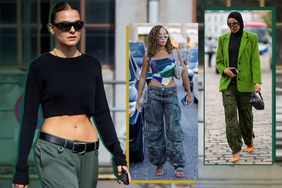 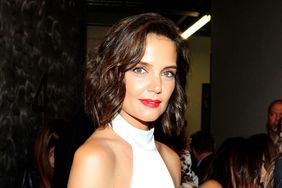 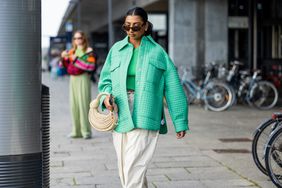 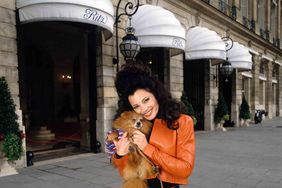 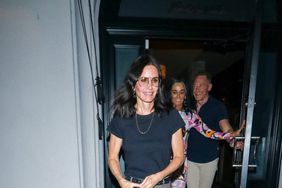 Courteney Cox Has Been Wearing This One Outfit for Years