Nothing's scarier than thinking about this trend being resurrected.

The countdown to October 31 always brings me childlike joy. I brainstorm my costume months in advance, partake in activities like pumpkin carving and ghost tours, and run down the list of my favorite Halloween movies. However, the more I re-watch those seasonal spooky classics, the more I find myself obsessing over details I barely noticed before. Like, why are the Olsen twins so rude in Double, Double Toil and Trouble? And what's up with Jamie Lee Curtis' white tights in 1978's Halloween?

The latter is something I think about often. With the release of Halloween Kills, which is available to stream on Peacock, I once again found myself reflecting on Laurie Strode's fashion choices. While her most iconic outfit is a blue button-down and flared jeans — a combo we even see repeated in the movie's sequels — her sweet school outfit shouldn't be overlooked. Early on in the original film, Laurie leaves her house wearing an ensemble that would arguably still work today: a deep green turtleneck under a beige knit cardigan, complete with a mid-length floral skirt and loafers.

It's the addition of white tights, though, that take things from cute to questionable.

Obviously, the main reason this legwear is included in Laurie's look is because white tights were a trend in the '70s. I even have a photo of my mom from around that same time period, wearing her own pair with wooden platform sandals. They were definitely a thing and I know it.

But that small fact doesn't stop me from cringing at my own experiences with white tights whenever I see the full outfit. Growing up in the '90s, these were what I wore to bad dances classes and with itchy holiday dresses. Thigh-high options were momentarily cool during my college days — if you wanted to dress as some sort of sexy Bo Peep while chugging a beer at a basement costume party — but the colorway still still seemed so juvenile and way too sweet to me. White tights can also be pretty distracting when it comes to styling. No matter what you wear with them, they're so bright and provide a lot of contrast, immediately becoming the focus of your look and making a major statement.

Still, like Michael Meyers, white tights refuse to die completely. They occasionally pop up on the Chanel runway and random street style stars, tempting me to take on the challenge of making the controversial trend work for modern day. I will admit that I have seen people pull them off, and pairing them with white shoes can make these babies look seamless and elongate your legs — a trick that 5-foot me is always willing to try.

If You're 5'5 Or Under, You'll Want to Remember These 11 Petite Fashion Tips

But on the flip side, I'm also perfectly fine with playing it extra-safe. Sure, I'll still copy Laurie's school outfit, but instead, I'll replace the weird white tights with colorful or metallic boots. And the good thing is, I haven't seen any celebrities take on the white tights trend or notice a true comeback. So if you, like me, aren't the biggest fan, it looks like we can rest easy — at least for now. 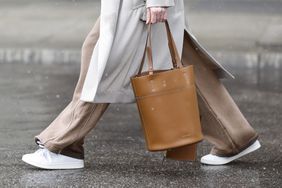